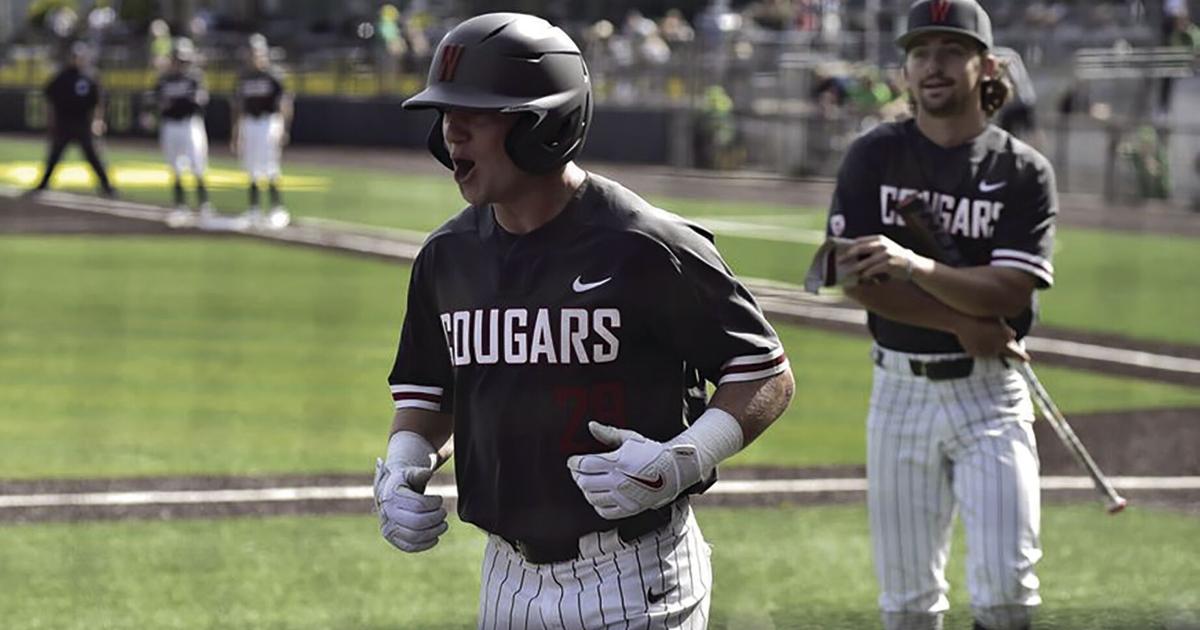 EUGENE, Ore. — Washington State’s baseball staff is aware of what its wish to see a giant lead evaporate earlier than their eyes. It occurred simply two days in the past. The Cougars was capable of precise a little bit of revenge Sunday.

Down 6-0 after two innings, Washington State scored the ultimate 5 runs of the sport to beat No. 10 Oregon 8-7 in 10 innings and take two of three video games in a Pac-12 Conference sequence at PK Park.

“It was a very enjoyable sport to be part of within the dugout,” Cougars coach Brian Green said. “Guys have been simply competing their tails off. We did what we thought we have been actually going to should do at this time. Really happy with our aggressive spirit.”

Senior Jack Smith extended his on-base streak to 22 games in going 3-for-4 with a double, two runs scored and an RBI for Washington State (16-22, 7-14), which outhit the Ducks 12-8. Senior outfielder Justin Van De Brake went 3-for-5 with two runs scored and an RBI. Sophomore outfielder Bryce Matthews went 2-for-6 with an RBI. Junior first baseman Jacob McKeon homered for the third consecutive game.

Sophomore right-hander Duke Brotherton (1-0) got the win, allowing just one hit in three innings of relief. He struck out two. Sophomore right-hander Caden Kaelber pitched a perfect 10th, striking out one to pick up his third save of the season. In fact, the Cougar pitching staff allowed just three hits and two walks in the final 7 1/3 innings.

“We knew our bullpen was drained,” Green said. “We knew our bullpen was going to should step up. You have a look at what occurred with (sophomore right-hander Tyler) Hoeft, and (sophomore right-hander Chase) Grillo, and Brotherton popping out for 3 innings and filling up the zone, and Kaelber. Those guys have been phenomenal. It was fairly brave as a result of these guys have been throwing in three, 4 video games in a row.”

Logan Mercado (5-1) absorbed the loss. He allowed a hit and an earned run in getting just one out in the 10th.

Two nights earlier, Washington State saw a 7-0 lead in the fourth inning evaporate in an 8-7 loss in 10 innings. On Saturday, the Cougars had an 8-1 lead at one point before holding on for a 10-8 victory.

But the Ducks broke out on top early in this one, scratching out a run in the first as Walsh’s one out single scored Milone. But Josh Kasevich grounded into a double play as Washington State averted more damage.

However, Oregon tallied five runs in the second. Cougar junior left-handed starter McKabe Cottrell walked the first batter and hit three of the next four to force in a run. Drew Cowley followed with a bases-clearing triple to make it 5-0 and ended Cottrell’s outing. Hoeft induced Milone into a ground out that scored a run. Walsh singled and moved to second on a wild pitch, but Kasevich flew out to end that threat.

Washington State then started its comeback with three runs in the sixth. Junior shortstop Kodie Kolden singled. An out later, Smith singled to center. With two outs, Van De Brake singled home a run and freshman third baseman Elijah Hainline followed with a two-run double to the gap in right-center that made it 6-3.

The Ducks got one run back in their half of the inning as Milone singled home Gavin Grant with one out to make it a four-run lead, but sophomore Chase Grillo got a pair of ground outs to extinguish the rally.

The Cougars got two more in the eighth as Smith doubled and McKeon smacked his fourth homer of the year, this one to center, to make it 7-5.

“We simply went on the market and tried to compete, put the bat on the ball and see what occurs,” McKeon said. “You simply know that your teammates have gotten your again, lot of perception contained in the dugout, irrespective of if we’re down or up.”

Washington State tied it in the ninth with a pair of runs against Oregon closer Kolby Somers. Sophomore second baseman Kyle Russell singled with one out. Kolden followed with a walk. Matthews then singled home Russell and Smith’s sacrifice fly scored Kolden to tie it.

The Cougars took the lead in the 10th as Van De Brake led off with a single. An out later, freshman catcher Will Cresswell was hit by a Mercado pitch. Andrew Mosiello walked senior outfielder Collin Montez to load the bases, but Russell struck out for the second out. Kolden then walked to force Van De Brake in for the go-ahead run.

Kaelber then finished it with a 1-2-3 bottom half.

Washington State will host Gonzaga at 6:05 p.m. Tuesday to start a seven-game homestand.