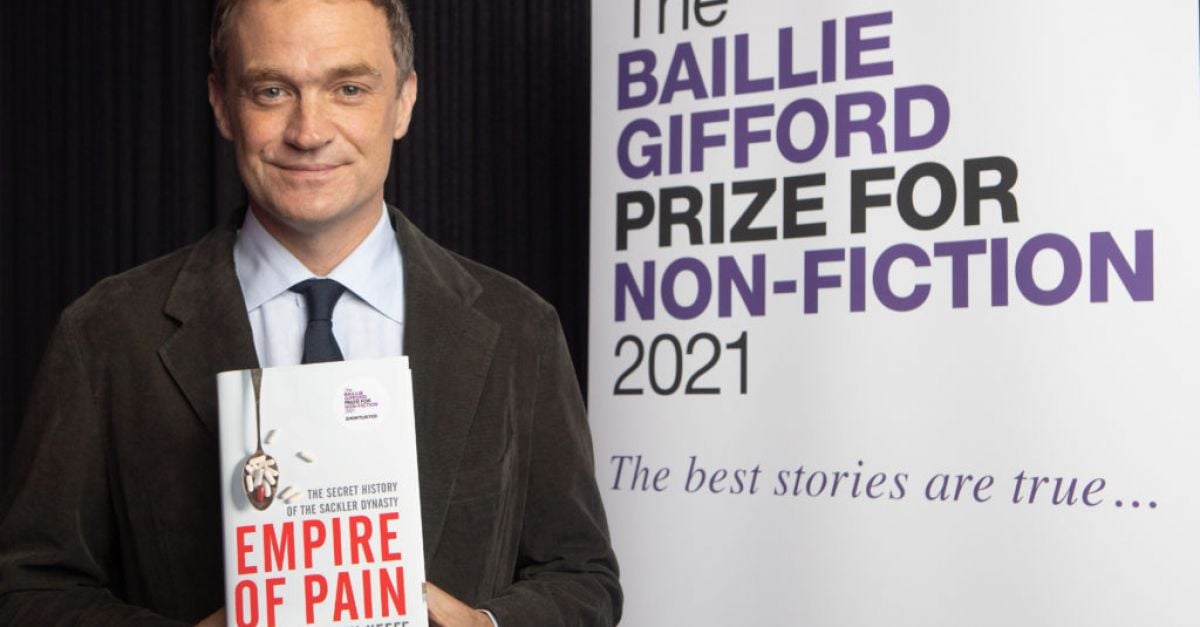 A “brave” journalist who battled threats of legal action to write about the “calculated acts of deception” of one of the world’s most prominent philanthropic families has won a £50,000 literary prize.

Patrick Radden Keefe’s book, Empire Of Pain: The Secret History Of The Sackler Dynasty, has been awarded the Baillie Gifford Prize for Non-Fiction, organisers announced on Tuesday evening at an event held at the Science Museum in London.

The Boston-born writer takes home the £50,000 prize, with chair of judges and editor of The Sunday Times Literary Supplement, Andrew Holgate, describing the book as “immersive and unputdownable”.

Congratulations to @praddenkeefe who has won the #BGPrize2021 with his revelatory study of the Sackler Dynasty, ‘Empire of Pain’. Read more about the book here: https://t.co/01utqL0A4B@panmacmillan @picadorbooks pic.twitter.com/Tf80hAEBIp

He added: “We were completely bowled over as a group of judges by Patrick Radden Keefe’s Empire of Pain. By its moral rigour, its controlled fury, its exhaustive research, the skilful writing, the bravery it took to write it. Above all, though, by its sheer, propulsive, narrative energy.”

His book examines one of the richest families in the world, known for their lavish large donations to global arts institutions. The source of the family fortune was vague, until it emerged that the Sacklers were responsible for making and marketing a painkiller often cited as the catalyst for the opioid crisis.

Through accessing thousands of private documents and conducting more than 200 interviews, Keefe unveiled “calculated acts of deception” that built one of the world’s great fortunes.

In a podcast, Keefe, an award-winning staff writer at the New Yorker, told prize director Toby Mundy that while researching his book, in which the Sackler family did not co-operate, he was the subject of alleged pressure tactics such as surveillance and threats of legal action.

Chair of the judges Holgate added: “This is an exceptionally important story Keefe has mined in Empire of Pain, but what impressed us most was the skill with which he has told his jaw-dropping tale, and how immersive and unputdownable he has made the telling.

“This is journalism as outstanding literature, and what we have here is a future classic.”

Other shortlisted titles for the prize included: Things I Have Withheld by Kei Miller; John Preston’s Fall: The Mystery of Robert Maxwell; and Free: Coming of Age at the End of History by Lea Ypi.

The prize, which was first awarded in 1999 to Antony Beevor for Stalingrad, was open to books in the areas of current affairs, history, politics, science, sport, travel, biography, autobiography and the arts.

Mark Urquhart, senior partner at Baillie Gifford, said: “Over the past 18 months, the rich and varied world of non-fiction has helped many of us escape and be transported to worlds and experiences far from our own.

“This is a testament to the quality and breadth of non-fiction writing being published in the UK. Congratulations to all the shortlisted authors, and especially to Patrick Keefe on winning this year’s accolade.”

The Baillie Gifford Prize for Non-Fiction’s podcast, hosted by Razia Iqbal, was devoted to Mr Keefe, and will be released on Friday.