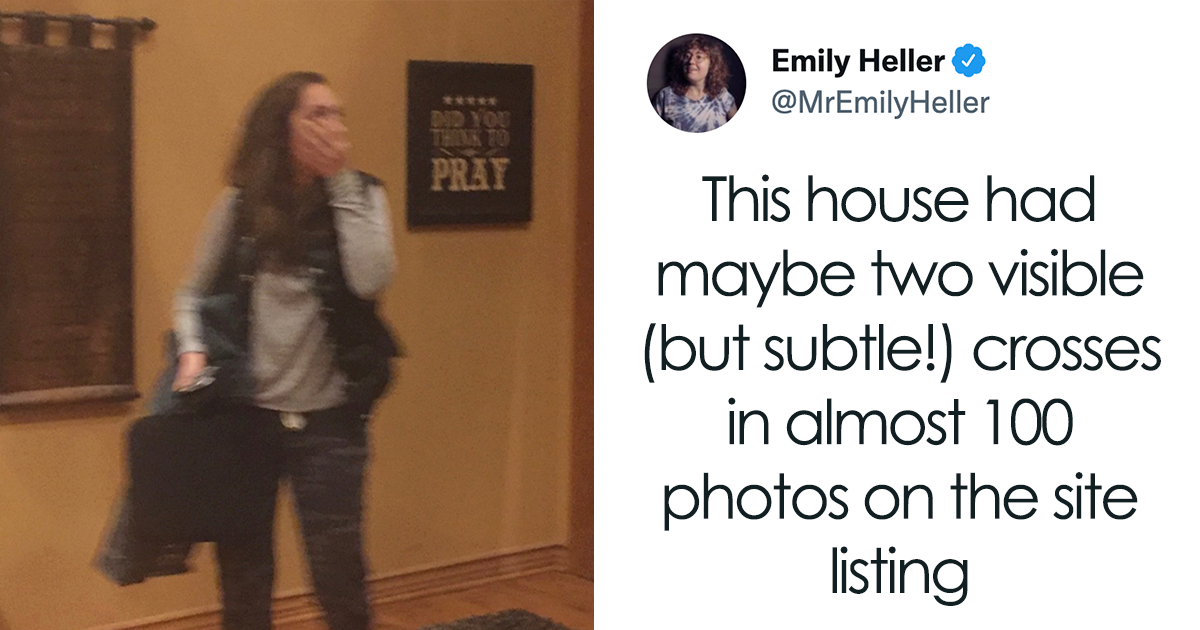 Renting an Airbnb used to be a great alternative to staying in a hotel. Having an entire home to yourself where you can cook your own meals and experience what it’s really like to live among the locals can be much cozier than spending your nights in a sterile hotel room.

However, recently, many people online have been airing their grievances about the home rental site. One particular risk that comes along with Airbnbs is that you can’t be 100% sure what the space will look like until you arrive. “Gorgeous beachside villa” might look beautiful in the photos, but the host is not likely to disclose in the description how often the hot water runs out. Similarly, if your host has an ulterior motive to make your stay feel more like a Christian church retreat than a vacation, they might conveniently forget to include that detail as well…

Earlier this week, comedian Emily Heller tweeted a video and some photos of an Airbnb she stayed in five years ago that made a lasting impression on her. Upon arrival, Emily and her friend found the home to be filled with crosses and Christian decor. Below, you can see the home for yourself, as well as read some of the responses Emily’s tweets have received, and decide whether or not you would agree to stay in this home. We’d love to hear in the comments if you have any shocking Airbnb stories of your own, and then if you’re looking to read another Bored Panda piece roasting Airbnb, we’ve got the perfect one right here.

Earlier this week, comedian Emily Heller relived one of her past Airbnb stays where upon arrival she found the house to be filled with Christian decorations

Since people are sharing terrible AirBnB stories, here’s one. This house had one, maybe two visible (but subtle!) crosses in almost 100 photos on the site listing. When we arrived, there wasn’t a single place your eyes could land that wasn’t DRENCHED in hardcore JC imagery. pic.twitter.com/xbG78i6Jzu

Now, there is absolutely nothing wrong with being religious and wanting to display your beliefs in your home. It’s very common for Christians to have some decorative crosses on the wall or maybe a quote of a Bible verse. But it’s a very different situation when you essentially trick people who just need a place to stay into being surrounded by your personal religious beliefs. When Airbnb was created in 2007, it was an innovative solution for many travelers. It was so exciting to suddenly have an option between hostels and hotels, and the idea of having a whole home to yourself was mind-blowing. The website skyrocketed in popularity, and as of December 2021, there were over 6 million active listings in over 100k cities and towns.

Recently, however, the once beloved home renting site has come under a bit of controversy. While Airbnbs used to be a way to save money while traveling, they have now become notorious for charging exorbitant rates and tacking on hundreds of dollars worth of housekeeping fees. Hosts sometimes also require guests to clean the space and take out the trash upon leaving, despite the fact that they paid a cleaning fee to stay there. When guests don’t follow their hosts instructions to a T, they are sometimes slapped with even more charges after checking out. The hassle of dealing with a demanding host has turned many travelers off from using the service. It might be worth it for a great deal, but the fact is that many travelers don’t save any money by using Airbnb. In a recent report by Upgraded Points, they found that among 20 US cities, it was cheaper in 17 of them for guests to stay in a hotel than to rent an “entire place” on Airbnb. And in the 3 cities that Airbnb came out cheaper, the price difference was less than $25.

There’s no question that renting an Airbnb can provide you with a memorable experience, as Emily has made clear in her Twitter thread, but personally, I would rather be confident that I’ll be comfortable when traveling than take a risk. Although hotels may be less “trendy” nowadays, they are more consistent with their services and prices, and you’ll likely be provided a great breakfast too. Let us know in the comments what you think of this Airbnb, and if you’ve ever stayed in a shocking home, we’d love to hear those stories as well.

The unique home has caused quite the stir on Twitter