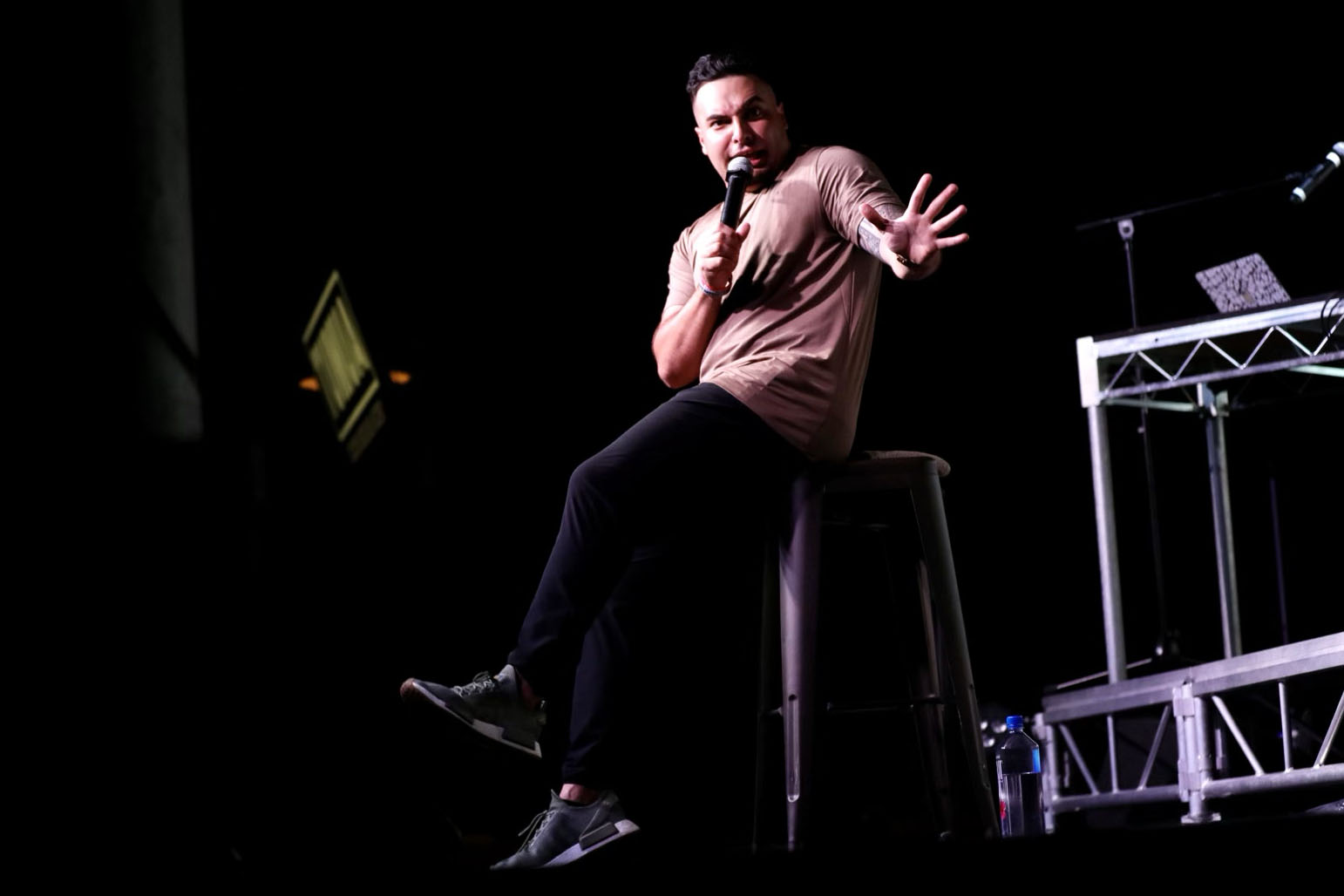 Kermet Apio was born in Honolulu but currently resides in Seattle. He won the hearts of the judges of The Great American Comedy Festival for his PG family jokes, some of which include local humor such as his Hawaiian-pizza-isn’t-Hawaiian skit (the video, above, has more than 600,000 views on YouTube).  —$25 to $35; Get tickets

This showcase features some of Hawai‘i’s hottest comedians. —$10 to $15; Get tickets

Matt Rife is one of the hottest up-and-coming comedians in the industry. His style is refreshingly genuine and quick witted. He started his career opening for comedians such as Dane Cook, Ralphie May, and DeRay Davis, and he made his television debut when he became the youngest cast member in history on MTV’s Wild N Out. —$25; Get tickets

A morning showcase of local comedians. —$10; Get tickets

Best known as a correspondent for The Daily Show on Comedy Central, Roy Wood Jr. is making his way to Hawai‘i. Many reviews of his TV special, Imperfect Messenger, highlight his wit and comedic timing. —$35 to $45; Get tickets

Tom Papa’s Netflix special, Tom Papa: You’re Doing Great! was a hit with many comedy fanatics. In this show he tackles topics such as body image, social media and Staten Island. With more than 20 years of experience, Papa has explored other mediums, including writing his own book and starring in films and podcasts. —$30 to $50; Get tickets

This Los Angeles-based comedian was named among Variety’s 10 comics to watch in 2017. Butcher is known for an observational style of comedy, which touches upon social issues such as their experience as a queer person and feminism. Butcher also has a special on Comedy Central called A Different Kind of Dude, which has more than 100,000 views on YouTube. —$30 to $35; Get tickets

Chad & JT go deep, a lot: Going Deep with Chad & JT is the name of their podcast and upcoming Netflix show. These unconventional comics want to spread positivity and awareness of societal issues with their prank comedy series. In their podcast they discuss pop culture and major current events. Besides Netflix and having their own podcast, Chad & JT have made a name for themselves by being on shows such as Hawai‘i Five-0, The Ellen DeGeneres Show and The Howard Stern Show. —$25 to $35; Get tickets

You might have seen Kyle Kinane on some notable shows such as Conan, The Tonight Show and The Standups. In three of his own Comedy Central specials, his humor is unfiltered, self-deprecating and relatable. —$35 to $45; Get tickets

Rita Rudner started as a Broadway performer in shows such as Follies and Annie before turning to comedy. In her shows, she enjoys taking a lighthearted approach and describes her style as observational and anecdotal. Some of her stories have to do with marriage and navigating life as a 60-something. She has been featured on The Tonight Show and has her own special called Rita Rudner: Live From Las Vegas. —$35 to $45; Get tickets

Michael Blaustein is co-host of the podcast Stiff Socks, one of the top 50 comedy podcasts on iTunes and Spotify. He and co-host Trevor Wallace answer silly questions and share unusual experiences. With more than 200 college campus performances, Blaustein has garnered a name for himself and starred in specials such as the Comedy Central on Campus tour. —$35; Get tickets

Felipe Esparza won season seven of Last Comic Standing, a show on NBC where comedians compete to win a talent contract. His signature saying, “What’s up, fool?” became the name of his podcast, in which he talks to random interesting people. Most of his content is focused on anecdotes from his childhood and growing up in East Los Angeles. —$35 to $45; Get tickets

Nick Coletti is quickly gaining popularity for his comedic work and social media posts. He originally got his start on Vine but has now moved on to TikTok, garnering almost 300,000 followers. One of Coletti’s most popular TikToks, with almost 2 million views, shows him mocking boxers who are on TikTok (exaggerating people’s mannerisms is a common theme in his work). Besides social media, he stars as Duncan in the television series The Real Bros of Simi Valley, which touches upon Southern California culture and its stereotypes. —$30-$50; Get tickets

If you like comedy and music, this might be the show for you. JR De Guzman, who serenades audiences with his hilarious songs, was born in the Philippines and raised in California, where he became a music teacher. Many of his jokes center around family life and culture, and he interacts with his audiences, like with his song “Office Romance,” about a couple in the front row at one of his shows. He was named the “new face” at Just for Laughs in 2017. —$20 to $30; Get tickets

Not only is Nimesh Patel a comedian, he’s also an Emmy-nominated writer. He became the first Indian American writer on Saturday Night Live and wrote for A Little Late with Lilly Singh on NBC. Chris Rock discovered his unfiltered and raw style of comedy back in 2016—and went on to hire him to write for the Academy Awards show. —$30 to $40; Get tickets

Jerry Seinfeld describes Mark Normand as the “best young and upcoming comic.” He was one of the headliners at the first Aloha Comedy Festival in 2020. Later that year he released a full special on YouTube called Mark Normand: Out to Lunch where he discusses topics such as drinking and anxiety. So far that special has garnered more than 10 million views, and his expert delivery has landed him gigs on Conan, The Tonight Show Starring Jimmy Fallon, The Late Show with Stephen Colbert and more. —$30 to $40; Get tickets

After having to postpone his January show at the Blaisdell, Gabriel Iglesias is back. Iglesias, also known as Fluffy, is known for his jokes about Latin American and pop culture. He has been on Netflix, Comedy Central and more, and filmed Aloha Fluffy here in 2013. —$67; Get tickets

This NFL cheerleader-turned-comedian is coming back to Hawai‘i. From jokes about her mom being cooler than her and a mall massage chair anecdote, her content remains relatable to her audience. Johnson-Reyes was on season 13 of MADtv, a sketch comedy series, where she played characters like a nail salon worker and a disrespectful fast-food worker. —$39.50 to $65; Get tickets

Born and raised in Hawai‘i, Tumua Tuinei has sold out shows at Blue Note Hawai‘i and built a large social media following (he currently has more than 100,000 followers on Instagram). He often incorporates Pidgin in his act and has an affinity for jokes about local culture. Think of your uncle or father—Tuinei has a joke that will remind you of at least one of them. —starts at $97; Get tickets

Jimmy O. Yang is a Hong Kong-born comedian and actor. Yang describes his humor as honest: He says whatever is on his mind. Recently, he starred in Netflix’s Space Force series and the movie Love Hard, in which he plays Josh Lin, a guy who catfishes a beautiful girl on a dating app. The rom-com showcases Yang’s ability to be vulnerable and make jokes about himself. Yang was also in the movie Crazy Rich Asians and HBO’s Silicon Valley. —$45.50; Get tickets

Tig Notaro was named one of Rolling Stone’s 50 best stand-up comics of all time. Notaro’s witty comedy shines through in her skits, whether they’re about her wife asking silly questions or commenting on her sexuality. Most notably, she has her own Netflix special called Tig Notaro: Happy to Be Here, which gives viewers a deeper look at her family dynamics, and yes, she even mentions her wife talking to their cat, Fluff.

This show has been rescheduled multiple times during the pandemic, and now it’s finally happening! Reggie Watts is the current band leader on CBS’ The Late Late Show with James Corden. Watts incorporates music with stand-up comedy that is 100% improvised. In his performances he elicits observations from his audiences and talks about current events. Besides being on numerous television shows, Watts appeared in the popular movie Pitch Perfect 2, about a female a capella group. —$45 to $65; Get tickets

Augie T. has kept himself busy, from serving on the Honolulu City Council to being a radio personality on Shaka 96.7. Born and raised in Hawai‘i, Augie T.’s funny local jokes have not gone unnoticed: He was named Best Comedian by HONOLULU Magazine and has won two Nā Hōkū Hanohano awards. This comedy show celebrates his 30-year comedy career. —$20 to $50; Get tickets

Ninety minutes of hilarious improvised comedy and song all based on audience suggestions. Cast members Ryan Stiles, Greg Proops, Jeff B. Davis and Joel Murray will leave you gasping with the very witty scenes they invent before your eyes. —$35 to $75; Get tickets

Nigel Ng is best known as the internet sensation Uncle Roger, a kind of Asian Gordon Ramsey. A lot of his content centers around looking at food videos and critiquing them; in his most popular video, he reacts to an egg fried rice recipe. Ng’s YouTube channel has garnered more than 6 million subscribers. His stand-up act covers topics such as British culture (he resides in London), and he’s even done a roast battle with Tom Lucy, another comedian. —$35.50 to $111; Get tickets

Nurse Blake is a registered nurse and the most popular nurse influencer on social media, with more than 3.5 million followers. His comedy features a mix of live skits, videos and interactive presentations drawn from his real-life experiences as a nurse and nursing student. —$39.50 to $59; Get tickets

The four-time Emmy-nominated singer, writer and comedian will take on the hottest topics and skewer politicos of the day as only he can, as he brings his most viral video song parodies to life onstage. Featuring live accompaniment by some of Broadway’s finest musicians, the show will also include personal stories, an audience Q&A, and brand new original songs written by Rainbow with Marc Shaiman and Alan Menken. —$57.50 to $189.50; Get tickets

Featured on national television and radio, Kim has been a writer and on-camera talent for television. She is also a writer and creative consulting for the Winnipeg Comedy Festival. —$20, Get tickets

Other Places to See Comedy