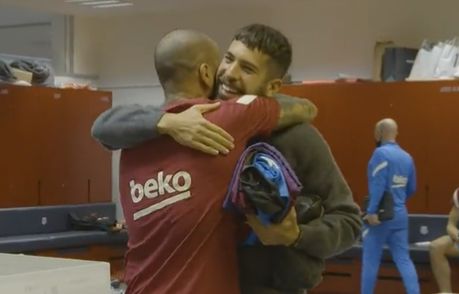 Dani Alves has already linked up with his new Barcelona teammates.

Alves’ dream return was confirmed last weekend, the 38-year-old free agent penning terms with Barca until the end of the season.

The Brazilian had been a free agent since leaving Sao Paolo in September and returns to Barca after five years away.

During his first spell, Alves was part of some of the legendary Barcelona teams, winning everything possible at Camp Nou.

And his return is a fairy tale for both he and the fans, especially coupled with the return of former midfielder Xavi Hernandez as head coach.

Alves is not able to play for Barca until January due to registration rules, but he has already begun light training.

And ahead of his first session on Monday night, the veteran met his new teammates and was reunited with some former colleagues.

You can see the video from behind the scenes below.