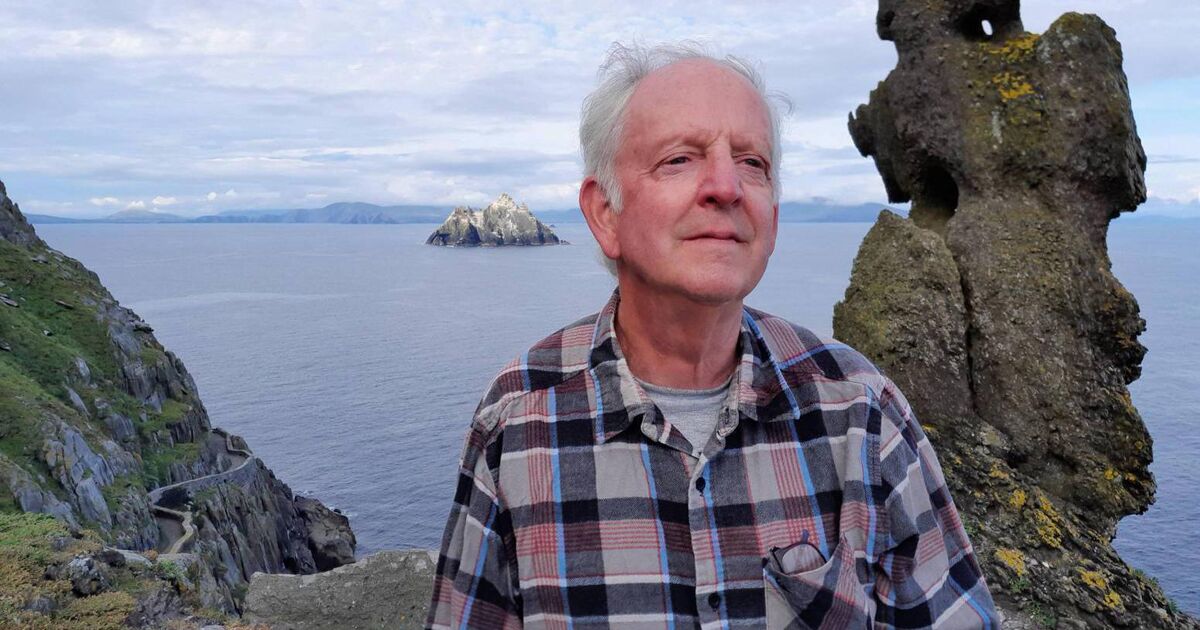 There are some places in the world that are incredible. Venice is one. The city, approached from the lagoon, basking in light reflected from the water, is unbelievably beautiful and without peer. Another is the island Skellig Michael. The shape of its silhouette viewed from the coast defies description. It rises from the waves like the kraken, with shards and peaks sharpened to pierce the lowering cumulus, and needle-beaked, shrill-voiced birds turn and turn in tightening gyres.

One word which comes to mind is inhospitable. The sibling island Little Skellig is prohibited, banned to humans, as dangerous as a cauldron of bubbling lava on Mount Etna. But the larger brother, Michael, can be visited in the summer months by those who wish to see the remains of the monastery or the populations of seabirds. The Office of Public Works has plastered billboards, displaying warnings of danger, on the mainland embarkation quays, on the boats that brave the sea squalls, and on the slippery landing pier. Standing at the bottom of the lighthouse road a guide reiterates safety rules and another perches on the saddle at the top, above the mouth of the yawning staircase, poised to alert all-comers of the hazards of descent.

In Returning Light Robert L Harris bears witness to the perils facing tourists, having served for 30 years as steward, skipping goatlike up the age-old steps or gently nudging a stricken charge, inch by inch over the uneven stones and friable soil, if vertigo or lumbago has brought them to their knees or bottoms. Unfailingly courteous and, as necessary, kind or firm, Harris marshals the daily influx of pilgrims, but his heart and sensibilities focus on emptiness and isolation.

For Harris, despite the other guides and workmen alongside whom he lives, the companions of choice are the silvery seals flopping in and out of the waves and the birds whose cacophony forms the soundtrack of his days and nights.

Petrels, umbilically bound to the cliffs during the breeding season, take advantage of the dark hours to swoop for squid. They scream as they approach their cliffhanging nests, guided by the answering calls of their mate. Daylight reveals gannets, fulmars, and puffins, almost Galapagian in their boldness and confidence around humans.

Mice do their best to consume or destroy the fabric of the sleeping huts while rabbits paw repeatedly at the soil, competing with puffins for the best burrow sites, only to experience their labours washed away when storms blow the loose soil over the cliffs and into the sea.

The fascination of Returning Light, ironically, is not the “turrets and crags” of the rock but Harris’s approach to understanding the psyche and how it responds to a way of living, monastic in some aspects, but without the community. How does Harris nurture his mind and soul in such elemental surroundings? What sort of person can deal with being claustrophobically marooned on a tiny dot, often cut off for days at a time, by weather?

The answer to these queries is philosophy and poetry. The conditions are ideal for writing verse. The constraints of the locus mirror those of the short form. Line structure forces the words into tight patterns, and the repetitions of the quotidian engender the need for new and different words to ferret out precise meaning.

Contraries, as William Blake wrote, are necessary to human existence. They are also the quintessence of poetry. On Skellig there is the opposition between land and sea. Waves scour the cliffs, cliffs break the waves. Silence is shattered by screeching. Light floods, darkness conceals.

On Skellig, towers are formed. Not manmade of bricks and mortar but created by nature. The prefabricated workmen’s huts cower at the base near the pier and the monks’ domed cells shelter in the lee of the ridge but elsewhere on the rock there is nothing. Light, forced by sheer vertical slate, forms shimmering towers. Wind is whipped into upright tunnels of force.

Birds circle in spirals, buffeted steeply up or catastrophically down to be battered on unyielding boulders or swept out, unresisting, to sea. Harris writes that “song builds towers within these empty places” and this notation consists of the “call of birds and seals echoing off the coves, ridges and indentations of the island”.

The essence of Skellig opposes that of the adjacent mainland. While Harris endures his time on the island he eschews his family at home. Battened down, held hostage by weather, Harris is exposed to his innermost self. How to voice his musings? The search for words uncovers new ideas. Experimentation with language invites innovative thinking. Austere circumstances, as religious brothers have long known, gestate profound thoughts.

Each day mirrors the former and reflects the next. Tiny changes become magnified. The arrival one night of a dozen golden butterflies seems miraculous. They settle for the night on the inner walls of the

hut before departing at daybreak, rising high in a shining column and disappearing over the peak and out to sea. It seems almost Biblical in its intensity.

A basking shark orbits the cove. An eagle, airborne and circling, shadows Harris as he circumnavigates his descent, unseen to all but a lone observer down at the landing place. Kayakers and divers arrive and disappear necessitating panic calls to the coastguard.

A Shearwater chick, merely a bundle of fluff, rides in Harris’s pocket as he travels to his mother-in-law’s deathbed. Her final hours are lifted by the sight of the tiny bundle of fluff, a being which expired, as did the woman, in the hours of darkness and occupied his own corner in her coffin. Through this anecdote Harris bridges his two worlds with the inevitability of death.

Of the multifarious meanings of the title word ‘returnings’ one is the yearly springtime arrival at the island and another is the planting of the boots on the mainland at the end of the season. In County Kerry, Harris is knocked for six by the beauty of an autumnal scene: “I remember so clearly standing under the shade of a resplendent sycamore, its leaves floating glistening butterflies over my head.” The colours on the roads from Portmagee to Killarney, those of rhododendron, fuchsia, foxgloves, and montbretia are liable to madden him after the months of grey ocean, lichen green, and black rocks.

Without sounding didactic, the key word in the title, and in the book, is light. As if in a ship’s crow’s nest, cradled by the natural formation of the “cloister” of the monastical grounds, Harris sits and ponders. He feels strangely “led on — somehow ripped open, slowed down — by the progress of light across the stones at this highest place”.

He can hear “the strange moving music of light” and marvels that centuries ago the medieval monks built their edifices, to “store” the light. As the sun moves across the sky the doorways invite the rays; in the interior of a cell, “the light would live, and empty my soul at will”.

This miracle of illumination, the return of the light, occurs annually towards the end of September, at the solstice marking the genesis of winter: It gives hope that the holy dwellings will provide shelter through the darker, colder months. Sitting there alone, centuries after the monks departed, watching as the gleam inexorably creeps towards the door of the oratory, Harris says his “soul stretches with this slow movement of light, within the slow movements of music formed out of utter silence”.

The extremity of his times on Skellig Michael has enabled Harris to see more clearly than others; the yearly schism in his existence has honed his powers of perception.

Reading Returning Light is a spiritual experience and one that should be proselytised throughout Ireland.