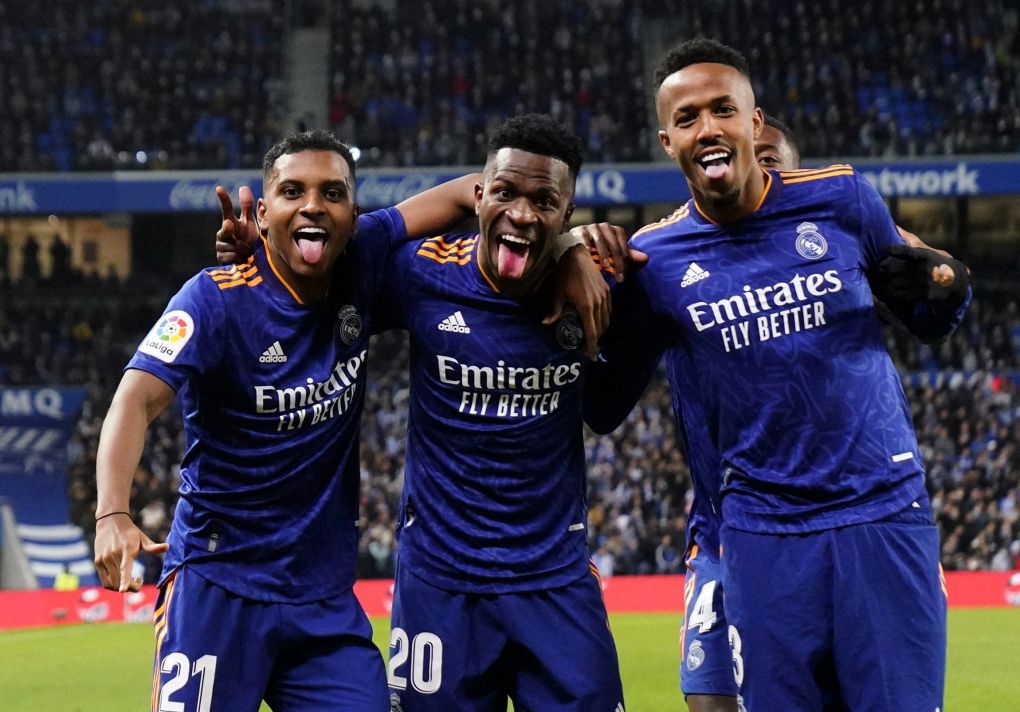 This article was produced in partnership with LigaFever.

As Paul Gascoigne once remarked: “I’ve had 14 bookings this season — eight of them were my fault, but the other seven were disputable.” What is not in dispute is Real Madrid’s current leadership of La Liga, or the fact that they won fairly and squarely on Saturday night in Anoeta – or if you really insist, in the Reale Arena in San Sebastián.

As promised last week on these very pages, I attended the game in the flesh, alongside my son who had flown down from Amsterdam to see the event. He was released from footy obligations, with the Dutch leagues below full-time professional level forced back into lockdown. So you would have thought that Madrid could have gifted us a magical evening together, but alas, Carlo Ancelotti and company were not in the pre-Christmas spirit.

The 2-0 win puts the cads from the capital eight points clear of Sevilla in second place and ten points clear of the side they defeated, now in fifth place on 29 points. It was Real Sociedad’s first home defeat this season (and their first since last April), and Madrid’s two goals doubled the tally conceded in the stadium since the August kick-off.

The first half was a reasonably even affair, with the hosts at times on top, taking the game to their illustrious visitors, a little out of sorts after Karim Benzema limped off half-way through the first half to be replaced by Luka Jovic. Jovic hasn’t scored for Madrid since dinosaurs roamed the Earth, but as my son said as he ran onto the pitch, “He’ll score”. Correct. And worse than that, he set up the first for the rampant Vinicius.

Talking of Vini, we seem to be experiencing one of those moments in top-flight football when a player is so “in the zone” that there is little that any opposing side can do about it. Cue Mohamed Salah in England or Erling Haaland last season in Germany. As La Real’s coach Imanol Alguacil said later in the press conference “Da igual lo que hagas” (It doesn’t matter what you try to do), in reference to the warnings he’d given his players about giving the chap too much space to run into.

The first goal after 46 minutes, which effectively killed off the game, came about because none of the five home defenders in Vini’s vicinity had the gumption to realise that he could only run in one direction to receive Jovic’s reverse pass, but it’s as if the Brazilian is blessed at the moment. Nothing gets in his way, and even more remarkably -given his failings last season – he doesn’t miss.

The hosts, sorely missing Mikel Merino and David Silva in the middle and their speedy in-form centre-back Aritz Elustondo (suspended), had no real answer. Luka Modric trotted around in that short-stepped placid way of his, Toni Kroos pinged it hither and thither, Casemiro kicked Alexander Isak quietly out of the game and Eder Militao was imperious at the back. Having watched Barcelona succumb to Betis a little earlier, the evidence in the current gap between the two sides was not in dispute for the jury, when addressed by the judge: “Will Barcelona recover and win the league this season?’” (No m’lud). “Will Real Madrid win the league this season?’” (Probably m’lud).

I have no particular problem with this. What I like about Madrid is that they come to your stadium and they try to play football. This was practically the first game this season in San Sebastián where the opposition neither parked the bus nor spent the entire game niggling and fouling. And once they stepped up a gear in the second half, La Real looked very ordinary – and they’re not.

The fact that Gareth Bale, Eden Hazard and Isco were nowhere to be seen is also significant. The only question mark about the inevitability or otherwise of them winning the title this season rests upon the perennial of whether Modric and Kroos can last the course, and whether there is sufficient cover to retain Ancelotti’s system when the tongues of the senior players start to hang out. Carlo is no rotator. He keeps things on the straight and narrow.

Madrid entertain Internazionale on Tuesday night, and having shot the Sheriff in the previous game will be keen on retaining top spot in the group. The injury to Benzema is of concern, but apart from that the squad had a fairly comfy evening up north.

It’s looking rosy for them, whereas in the Camp Nou you could see on Xavi’s otherwise inexpressive face that reality was kicking in. Real Betis are back on a roll, and had little problem in repelling what Barcelona had to offer. Resting Gerard Piqué, Ousmane Dembele and the Frenkie of the De Jongs on the bench from the start didn’t help matters either, and Betis’ splendid counter-attack goal in the 79th minute said a lot about the contrasting states of both sides – the absences of Pedri and Ansu Fati notwithstanding.

It’s my goal of the weekend for various reasons, and you could base a whole coaching manual on it. As Hector Bellerin brings the ball out of defence, over to the right, the first line of Barcelona’s press (four players) has already been breached. Bellerin passes to Guido Rodriguez (I think) who receives the ball under pressure from Jordi Alba, but Alba’s too high and as Guido continues the straight-line pass to Sergio Canales, Barça’s midfield has been effectively obliterated.

Canales is a smart player, and you know (as I did, looking up from a quiet coffee in a shopping mall bar) that he’s not going to blow it. De Jong, to his credit, gets back to challenge him but Canales slips the ball to the left, looks up across the war zone and sees friendly soldiers Cristian Tello and Juanmi, faced by Clement Lenglet and Sergino Dest. Sergio Busquets is hobbling back, but it’s too late. Canales caresses the ball to Tello, who, understanding the intention perfectly, nicks the ball to his left where Juanmi, another one who rarely misses, side-foots it with slide-rule grace past Marc-Andre ter Stegen.

It’s not a goal that would have happened in Xavi’s day, and as he subsequently pointed out in the press conference: “We have to be smarter”. Well indeed – and in Munich on Wednesday night you can see the horror memes already being drawn up. “Munich” has one more letter than Munch, the guy who painted The Scream.  Spooky, eh?

Atlético Madrid, another side experiencing some in-flight turbulence, lost surprisingly (2-1) at home to Mallorca to a goal by the tricky Take Kubo, but once again, as the forward pass is played to the Japanese Madrid loanee, the entire Atlético side (save Koke) is in the visitors’ half. It seems to have been the pattern for the weekend.

Kubo springs joyously into the open space pursued by poor Koke whose sprints, at the best of times, resemble an affable bowlegged grandfather playing with his grandchildren. The tiny Kubo leaves grandad behind and, like Juanmi at Camp Nou, slides the ball low and inevitably into the net. Atlético slip to 4th, ahead of La Real on goal difference, and now must visit their strutting neighbours at the Santiago Bernabéu next weekend after a Tuesday night visit to Porto, where only a win will keep them in the Champions League.

Three sides from Madrid in the top six. Capital stuff. Next weekend’s derby should be very interesting indeed, but there are other fixtures to savour too. Betis v La Real is going to clear up some issues, although the Basques have a Europa League do-or-die on Thursday at home to PSV. Throw in the other derby (Cadiz v Granada) and an interesting game in Bilbao (Athletic Club v Sevilla) and it’s all to look forward to.