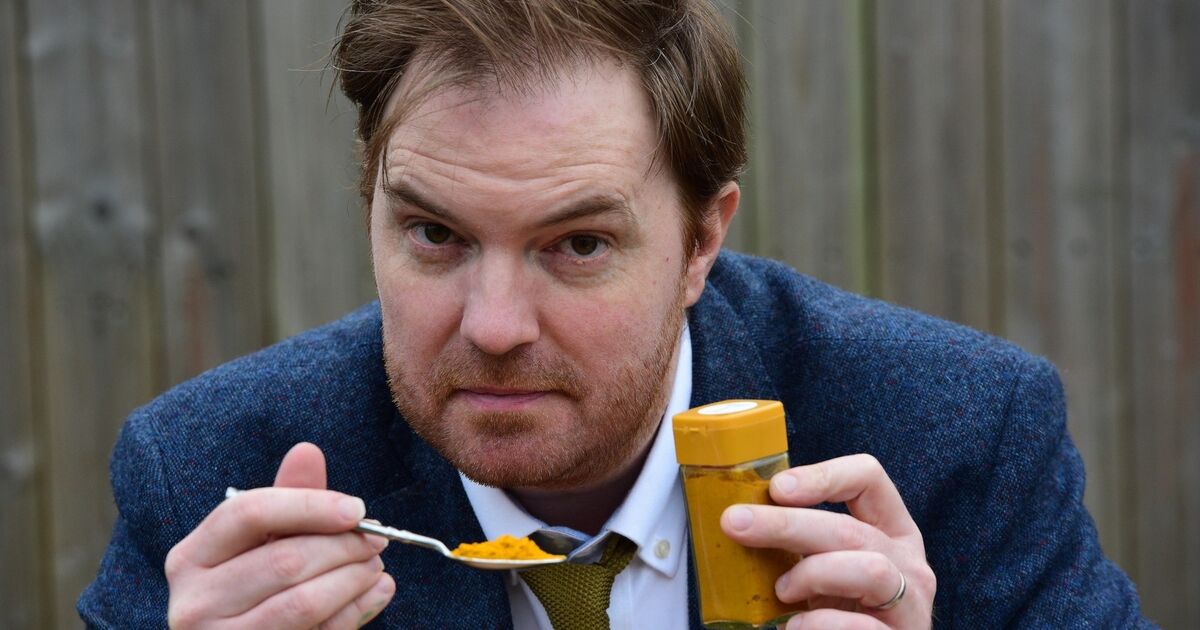 Full disclosure: I wasn’t sure what turmeric was. I didn’t know it was one of the main components of curry powder and I most definitely didn’t know it was a root plant resembling ginger. But never in a thousand years did I think it would change the way I tasted food and, bizarrely, made me “mindfully eat” for the first time in my life.

Turmeric has long been a central part of Ayurveda traditional medicine, which originates from the Indian sub-continent. It was and still is prescribed for its anti-inflammatory properties and aiding digestive issues. Under the microscope of modern-day medicine, it is found to have abundant amounts of “curcumin”.

It’s this ingredient where most of turmeric’s benefits hail from. It is said that curcumin can help with arthritis and other osteoarthritis ailments.

There have been some small-scale studies on its effects and the results so far have been positive. One recent study found it helped in the treatment of knee osteoarthritis ( Safety and efficacy of curcumin versus diclofenac in knee osteoarthritis: a randomized open-label parallel-arm study, by D Shep, C Khanwelkar, P Gade et al).

This caught my attention as I have dislocated my kneecap three times. Like an old medieval knight around an open fire, I tell tales of how it happened and complain about the pain when the weather gets colder.

I have bought every spice that has ever existed, yet I’ve rarely used any of them. I’ll see a chef on the telly make some amazing curry and I’ll rush out and buy all the glamorous ingredients.

My culinary enthusiasm has generally worn off by the time I plonk the shopping bags on the kitchen table. Instead of peeling, chopping and infusing, I generally end up just queuing in the chipper.

A common question is posed regularly by my wife as she holds some unrecognisable vegetable in her hand: “Bernard, what’s this? It has been in the fridge for months.” The last time she asked me such a question I replied: “Eh, I think that’s a taro root. Sorry, it was a taro root.”

I inspected my collection of abandoned seasonings. I found five-spice, nutmeg, cardamom, ginger, cinnamon, cumin and star anise, but no turmeric.

On close inspection, I wondered why spices have best-before dates. In my mind, they are like first-aid kits — you mightn’t always need them but, when you do, they are generally stuffed in some forgotten enclave of the kitchen.

Out-of-date spices aren’t particularly dangerous to eat, but they will lose their potency and flavour over time. I thought of contacting the Guinness Book of Records to see if my little pot of cumin, with a best-before date of 2003, was one of the oldest in domestic servitude.

So it was off to the shops like a modern-day Marco Polo to buy me some curcumin enriched turmeric.

The two main things that my internet research suggested I do with the yellow spice was mix it with coconut oil and brush my teeth with it. Apparently turmeric is a very good natural teeth whitener. The second and most common trend is to boil it in water and make a turmeric tea.

The next morning I mixed it with the coconut oil and brushed my choppers. As I stared into the mirror, my teeth transformed into the fangs of a street urchin from a Dickens novel. My teeth aren’t pearly white by any means — years of coffee and tea have made sure I’ll never have that Donnie Osmond smile — but they got worse… a lot worse.

Warning! Turmeric stains EVERYTHING YELLOW. My teeth were so yellow they looked like the highlighted notes you borrowed from your college buddy who bothered going to the lectures. I panicked and started frantically pummelling my teeth to get the amber stains off. Eventually, 15 minutes later, they looked somewhat normal. No wonder it works well as a teeth whiting system when you’d have to do an industrial scrub to get it off every morning.

The tea was a far easier option. All you have to do is boil water in pot and mix in a teaspoon. Then you let it simmer for a few minutes and let it cool down. I decided to drink it in the evening. There’s a very special time in our house that I like to call the “18:20 quiet”.

For some reason, every day at 20 past six, our three kids are sufficiently pacified by the telly and I have 20 minutes to do whatever I want.

The first time I tasted the tea, it was weird. It’s a funny spice. Its has all the characteristic of ginger with none of its flavour. You get a liquorice aroma and a cleansing sensation on the tongue, but an odd taste of something that I couldn’t figure out.

My daughter Olivia asked me: “Can I taste it Daddy?” She took a tiny sip and screamed: “Aghhhh that’s dis-gust-ting… it tastes like the ground.” And that was it! It tastes of the earth. It is the quintessential earthy flavour.

Without noticing, I didn’t have anything else to eat that evening. That is a massive milestone for me as I’m a night eater. Normally, I silently polish off a tub of Häagen-Dazs in the dark and have to deal with a sugar hangover the following morning.

The next day, I began to question everything I put in my mouth. Not why I was eating it, but what does this taste like? Do I actually want this?

By the time I had my dinner that evening, I left half of it on the plate. For the first time in years, I realised I don’t actually like chicken dippers. I was just eating them because I put them on for the kids.

At 18:20 I made my tea again and this time I actually liked it. Not its flavour, but the way it slowed me down and made me think about what I have been putting into my gullet for all these years.

However, for some reason, it has slowed down my eating habits and made me question the flavour of food. I’m still hungry, I still wolf down the odd pot of salted caramel at night, but there’s something in my young daughter’s “tastes like the ground” observation that has ignited a calmness in me when I eat.

Of all the influences and trends I’ve tried so far this year, turmeric has had the most impact on my thoughts about food and consciously made me more mindful when I eat.

As for whitening your teeth? I’d avoid that one, unless you’re involved in a stage adaptation of Oliver.