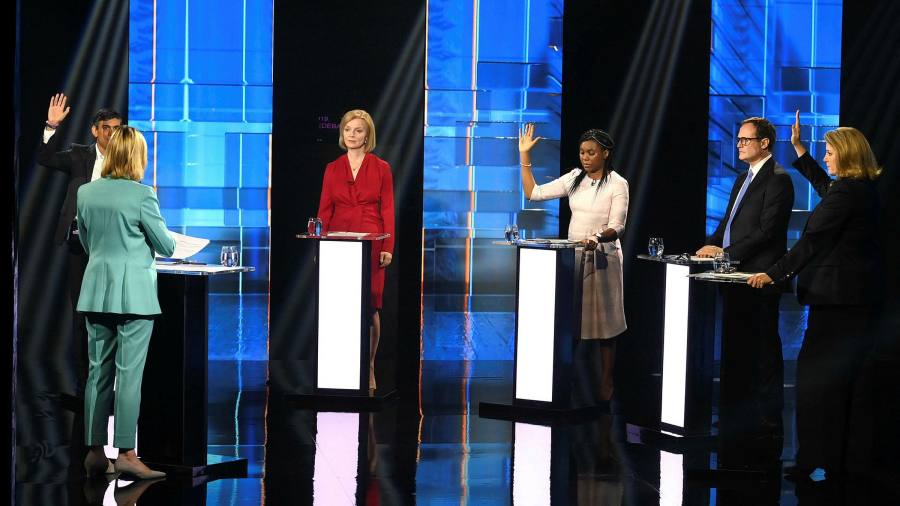 All five candidates for the Tory leadership vowed to impose real-terms pay cuts on millions of public sector workers as they held the second televised debate in the contest to succeed Boris Johnson as prime minister.

Johnson is expected this week to accept the recommendation from various public pay bodies for an increase in salaries for state workers of close to 5 per cent. But union leaders have already threatened strikes, warning that this is far from enough when inflation has already soared past 9 per cent.

At the second televised hustings of the leadership race — this time on ITV on Sunday evening — all five candidates to succeed Johnson said they would maintain his approach to state pay.

Kemi Badenoch, a former junior minister, admitted it had been a “really difficult time with public sector pay” but said that economic growth had been too weak to sustain higher salaries for state workers. “I would love to tell all the public sector workers they would get 5 per cent, 10 per cent, but the truth is that it is not going to be that easy.”

Liz Truss, foreign secretary, said it was important for the government to “stick to our guns” to prevent a wage price spiral.

“We know what happened in the 1970s when inflation got out of control. We can’t go back to that. So we have to be firm,” she said. “We have to get the best possible deal we can to help our hard-working public sector workers but what we can’t have is inflationary pay rises.”

Rishi Sunak, the chancellor, spoke of “unity” among all five candidates in terms of letting the pay review bodies make the difficult recommendations. “All of us would assume that is sensible,” he said.

Penny Mordaunt, trade minister, and Tom Tugendhat, chair of the foreign affairs select committee, both said the decision should be mostly left to the existing pay review bodies.

After the event, a snap poll by Opinium of 1,001 people who had watched the debate showed that Sunak had won, with 24% of those surveyed saying he had performed best, followed by Tugendhat on 19%. Trailing them, Mordaunt received 17%, followed by Truss with 15% and Badenoch 12%.

All five said that they would not hold a snap general election if they became prime minister. Asked if any of them would bring back Johnson in their cabinet, none put up their hand.

The argument about economic responsibility once again hung heavily over the debate, as it did in Friday’s first public hustings on Channel 4.

Sunak is under fire from other candidates for having raised taxes as chancellor, mostly to pay for the fallout from Covid-19 pandemic restrictions. He in turn has accused others — including Truss — of fiscal irresponsibility for promising to cancel a looming rise in corporation tax. Truss last week set out more than £30bn of largely uncosted tax cuts, saying they could be funded through headroom in the Treasury forecasts.

The five MPs, given the chance to ask each other questions, used it as an opportunity to undermine each’s other’s candidacy.

Mordaunt asked Sunak about defence spending cuts at the Treasury when he was chancellor. He replied that he eventually gave the Ministry of Defence its biggest financial uplift since the cold war.

Truss asked Sunak if it was true to say that he favoured more trade with China, to which he replied that he backed British trade but only where values could be protected.

Sunak pointedly asked Truss: “You have been a Liberal Democrat [as a teenager] and a Remainer [in 2016]. Which one do you regret most?” The foreign secretary turned the question around by saying she had gone to a state school in Leeds and not benefited from the kind of expensive education that Sunak did.

Badenoch meanwhile asked Sunak why he had not taken seriously her warnings over Covid loan fraud. He replied that this was wrong, saying dozens of people had been arrested in recent months.

Tugendhat used his question to ask Mordaunt when she would spell out in more detail her policy plans. She replied that some polling suggested she was the only leader who could beat Sir Keir Starmer, head of the opposition Labour party.

The third ballot of Tory MPs takes place on Monday, with the candidate securing the fewest votes eliminated.

Further ballots on Tuesday and Wednesday will cut the shortlist to a final pair, who will then be put before the 150,000-plus Tory members prior to a vote in early September.