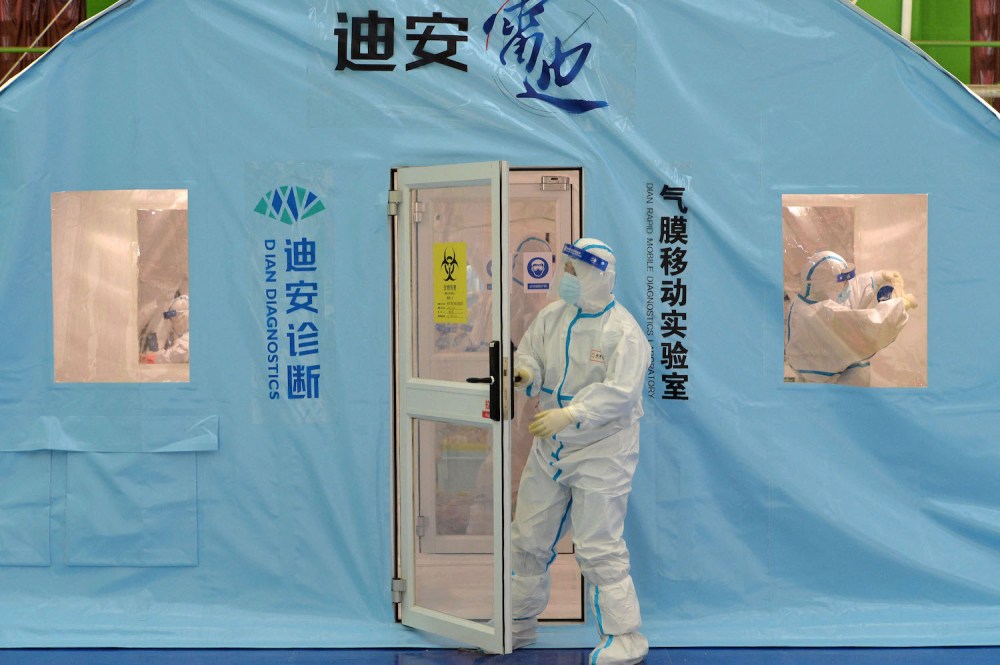 The highlights this week: The city of Tianjin enters a partial lockdown amid a coronavirus outbreak, why Beijing sympathizes with Moscow in Kazakhstan, and China and India hold their 14th round of border talks.

If you would like to receive China Brief in your inbox every Wednesday, please sign up here.

The highlights this week: The city of Tianjin enters a partial lockdown amid a coronavirus outbreak, why Beijing sympathizes with Moscow in Kazakhstan, and China and India hold their 14th round of border talks.

If you would like to receive China Brief in your inbox every Wednesday, please sign up here.

Tianjin Begins to Lock Down

The important northern city of Tianjin is under partial lockdown amid a serious coronavirus outbreak—by China’s stringent standards. Authorities have entirely shut down large parts of the city and restricted travel, gatherings, and schools throughout. Tianjin has recorded 137 COVID-19 cases, including least two confirmed omicron cases, marking the first official instance of community spread of the highly contagious variant inside China.

The cases are so far mostly confined to Jinnan, in the southern part of the city. Confirmed cases in the center of the city will likely put it under a more comprehensive lockdown. There are also some signs that the outbreak is more serious than the initial numbers show: A case in Anyang in central Henan province traces back to Tianjin and appears to be from a different strain than the cluster of confirmed cases.

Most of the known COVID-19 cases in Tianjin are among vaccinated people, which suggests the number of omicron cases could be more than suspected, given the variant’s ability to evade vaccines. But the vaccines may also be helping contain spread; although Chinese-made vaccines underperform their mRNA counterparts in the West, they still effectively prevent hospitalization and death. China has made a huge distribution of booster shots, with 331 million delivered in January so far—compared to just 120.5 million in all of last month.

Tianjin’s proximity to Beijing is a chief concern for political leaders: By Chinese standards, the two cities are neighbors, with a 30-minute fast train between them. That connection makes the possibility of transfer between the two worryingly likely, especially for a capital preparing to host the Winter Olympics. All of Tianjin is now under a limited exit ban, with residents requiring permission to travel.

China can perform COVID-19 tests on a scale that is unimaginable anywhere else; this mass testing is one of its chief tools against COVID-19. Most of Tianjin’s 14 million residents have been tested in the last week, with some communities having to turn out at 3 a.m. in the winter cold for tests, according to friends in Tianjin. The city has just ordered another round of testing for the whole population.

Although China’s testing infrastructure is superb, the information it disseminates about the spread of COVID-19 is less so. Chinese scientists are still pushing propaganda stories about cold-chain contagion, in which the virus supposedly spreads through frozen goods—seen by most global scientists as an impossibility. Last year’s World Health Organization mission tentatively supported the idea that meat from infected animals in cold storage contributed to the initial outbreak, but it did not endorse the idea that cold surfaces transmit the disease.

Zhengzhou, the capital of Henan province, is also under partial lockdown after a handful of COVID-19 cases. These cases haven’t been confirmed as omicron, and the lockdowns are occurring at the community level. But the speed of the restrictions left one unfortunate woman trapped in her blind date’s house after her parents arranged a series of meetings. Her video blog fascinated netizens.

As I wrote last week, more lockdowns and travel restrictions are likely to follow across China ahead of the Spring Festival holiday and the Winter Olympics, both in early February. Some officials have suggested at local meetings in Beijing and Shenzhen that people stock up on at least one month of food. Beijing authorities have already instructed residents not to travel, and the Olympics will be held inside a tightly closed loop.

China is a long way off from having the confidence to weaken its COVID-19 measures, even given the increasing confirmation that omicron is less serious than other strains.

Autocratic sympathies. China seems pretty content with the outcome in Kazakhstan, where Russian-led forces from the Collective Security Treaty Organization have violently suppressed protests and rioting crowds. Having the Russians take the public relations hit is perhaps a plus for Beijing, which shows no signs of discomfort with increased Russian influence in Central Asia.

Observers in Washington have long held out a somewhat naive hope that the de facto alliance between China and Russia could be split by playing on territorial tensions, but the two countries work remarkably well together. China is also endorsing the use of its techniques of fear in Xinjiang by others, describing repression as part of an “anti-terrorist” toolset.

Young nationalists. A talk given by Yan Xuetong, a major figure in international relations studies in China, gives an intriguing insight into older generations’ skepticism toward young nationalists. Yan, who is 69 years old and privately sharp-tongued, reportedly described young students as condescending toward the wider world and wrongly convinced of China’s unique righteousness—that the West is evil, and that Westerners hate China.

That sentiment certainly reverberates in the increasingly heated atmosphere in China: Younger Chinese are influenced by the sharp turn toward anti-Western propaganda under President Xi Jinping. But it’s worth keeping in mind that Yan teaches at the elite Tsinghua University, where students increasingly come from the richest echelons of Chinese society. That may not be the most representative group—but it is a powerful one.

India border talks. China and India are holding their 14th round of talks since June 2020 on resolving long-standing border conflicts, which flared in a deadly clash that year. The diplomacy is frequent but inconclusive; the talks have repeatedly broken down in mutual accusations. Although the two countries have pulled back military forces from some areas, others remain potential flash points.

The United States is closely observing China’s buildup on its border with India, as well as its intrusions into other countries such as Bhutan, where more installations have been noted in recent days.

[For more on the border talks, sign up for FP’s South Asia Brief by Michael Kugelman, delivered on Thursdays.]

Border holdups. The China-Vietnam border has reopened after a three-week closure sparked by COVID-19 concerns. Although attention has focused on the supply chain crises at Chinese ports, coronavirus restrictions have affected its land borders just as badly, with further militarization to ensure the quarantine wall holds. The border between China and Vietnam is one of the worst affected, with long delays, a sharp drop in trade, and increased security measures on the Chinese side.

The problems have added to tensions between Vietnam and China, which have long-standing issues stemming from the Chinese invasion of Vietnam in 1979 and disputed claims in the South China Sea. The restrictions are causing economic losses throughout Southeast Asia, with some cargo abandoned on the roadside due to shuttered Chinese markets.

State jobs in demand. A recent study shows that nearly half of Chinese graduates are taking jobs in government or in state-owned enterprises, especially those from elite schools. Of around 9 million graduates in 2021, 49.3 percent work in the state sector. That figure has gradually increased for years as the power of the state expands under Xi and as students seek job security. Unsurprisingly, study abroad participation has also declined during the pandemic.

Korean drama quietly returns. Chinese authorities allowed the first South Korean drama in six years to stream in the country this week. The decision signals slight reconciliation, but it also shows how much China will seek to economically punish countries over political squabbles. Like many Chinese restrictions on trade, the ban was never officially confirmed but came after South Korea allowed the installation of the U.S. THAAD anti-missile system on its territory.

China subsequently targeted a range of South Korean businesses for boycotts and trade restrictions, hardening South Korean attitudes toward Beijing. The cultural boycott has been particularly long-standing; no South Korean movie has screened in China since 2015. Such moves are relatively common in East and Southeast Asia: South Korea banned Japanese films and music from 1945 to 2004.