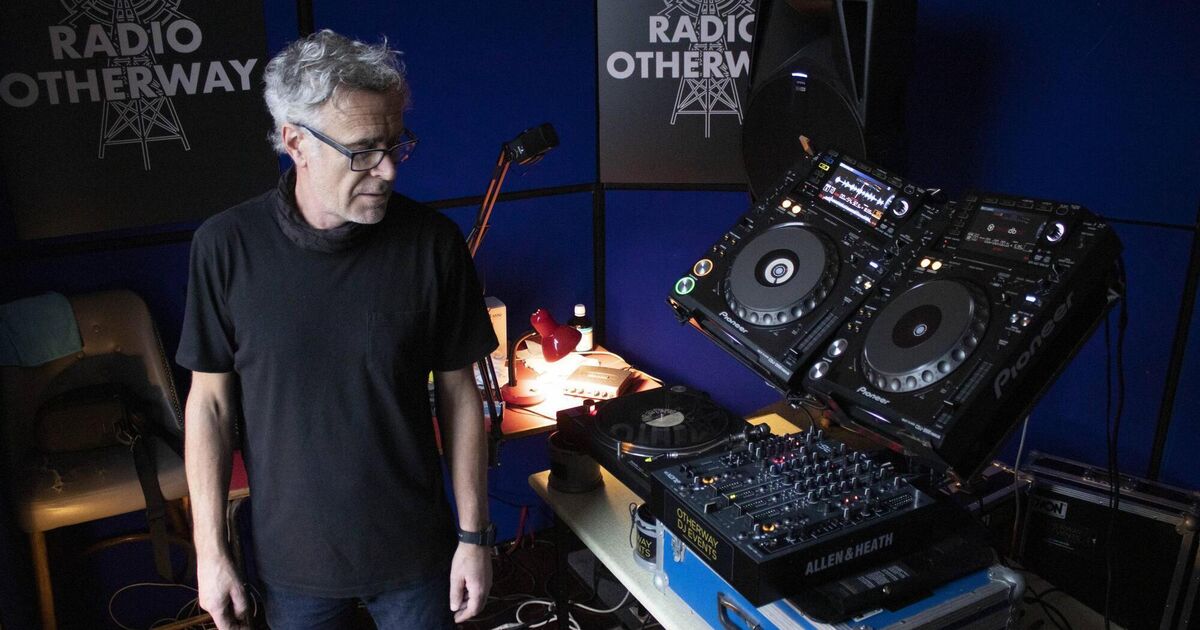 To say that Cork city has had a long and distinguished history of community-based radio would be quite an understatement.  From the storied days of the 1980s pirates, to the likes of Radio Friendly and later FreakFM, to recent online services like Room101 and Irish Radio International, the city’s culture has found room to develop on its own terms by creating its own broadcast spaces for DJs to lay out their vision and frames of musical reference, away from the stultification of formats and playlisting.

Against the backdrop of the Covid crisis and last year’s lockdowns stepped Radio Otherway, a decidedly DIY service run by Cork DJ Colm Motherway, continuing in that spirit of making space for music in hard times. Unlike its predecessors that used ‘traditional’ radio technology and occupied a slot on the MW or FM bands, this station is an internet-only service.

“It came about last year, during the first lockdown, where people were broadcasting on (streaming video service) Twitch,” says Motherway. “I did it, and a few others started joining me as well, and then it just developed from there.  “Over the summer, we moved onto (licenced streaming audio service) Mixcloud, and more local DJs started coming on board, mainly broadcasting from their homes because of Covid, where I was driving around delivering gear and stuff to people.”

He was never going to be short of DJs to reach out to, looking at the city’s music scene, and there’s quite the rundown of Leeside selectors putting in a shift – from legendary record-slinger Jim Comet and regulars like the Dim the Lights! Crew, to DJs like Lisa Oh! and emerging names from UCC’s DJ Society.

Motherway talks about the process of engaging with music heads from different backgrounds, including people he’s worked with, and building a lineup of regulars.

“We’re adding more and more people as we go along. I’m reaching out. We’re working with [local DJ] Stevie G, he’s been huge in getting the new Irish involved in the local scene, and we want people to get involved.  “Reaching out to younger people, too, like the UCC DJ Soc, and helping them get their name out there, and broadening our own thing out a bit.”

In the pursuit of expanding away from the malaise of spinning tunes at home, Motherway and crew have gone about setting up a purpose-built studio in the city centre, filled with Motherway’s accrued gear and brought to life via some collective DIY effort.

It’s a community radio station run for the sake of music, and a product of the times we find ourselves in.  Motherway outlines his vision for the project, and how it fits into a Cork scene that will have to adapt to profoundly changed circumstances.

“Our shows have probably about 200 people tuning in, on the weekends, sometimes more than that, into 400, 500, which is great. It doesn’t seem like a lot, but competing with TV and everything as well, we’ve definitely made waves, and people are tuning in.

“The next thing is to reach out further, and more subscriptions will come with more listeners. We’re aiming toward sustainability, and everyone who’s onboard has done their part.”

Listen to Radio Otherway for free on https://www.mixcloud.com/radiootherway, or you can subscribe for €3 a month for full tracklistings, offline listening and other perks

Beginning as an offshoot from radical paper Rabble and becoming a full community outlet in its own right, Dublin Digital Radio (DDR) is a point of convergence for the Irish underground, with dozens of shows and DJ sets running the genre gamut airing per month, and hundreds of shows, mixes and special projects streaming on-demand from their website.  listen.dublindigitalradio.com

Self-described as an artist-focused, queer-run arts centre based in Belfast, The343’s in-house broadcasting facility encourages “difficult, funny, informative, and respectful conversations on air, and promotes a wide range of genres and approaches to broadcasting and sonic art”. the343radio.com