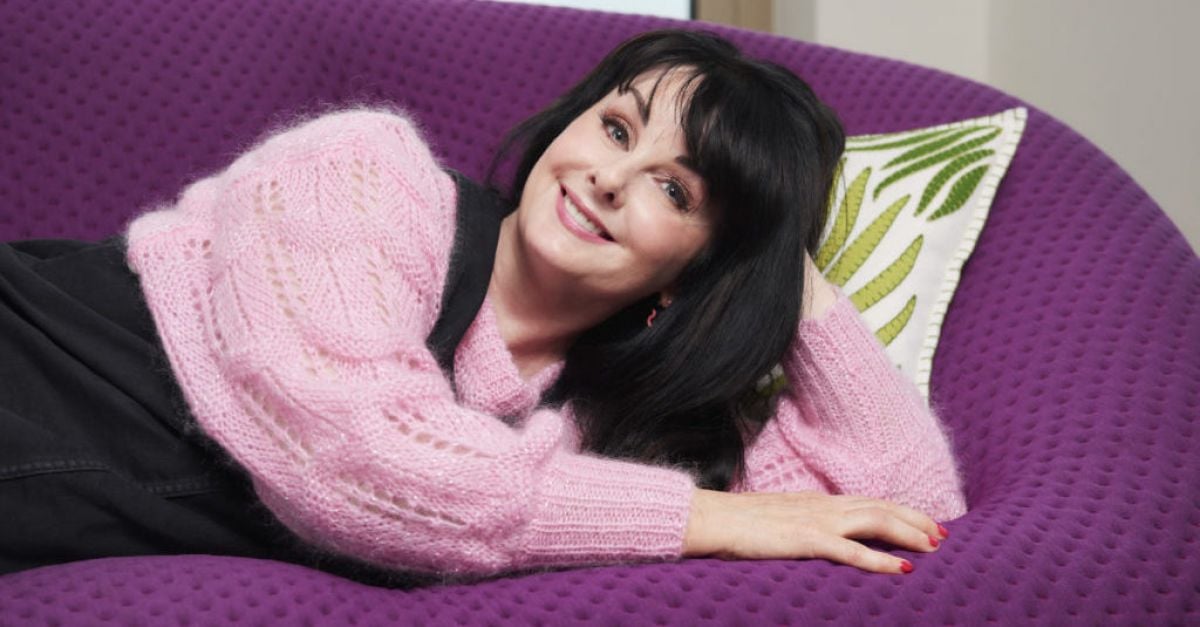 There aren’t many novelists whose handling of dark subjects like addiction and depression can leave you feeling waves of compassion and empathy in one breath – and have you chuckling into your cocoa in another.

That is the genius of bright-as-a-button Irish writer Marian Keyes – whose novels including Watermelon, This Charming Man, Grown Ups and The Break, have sold in their millions.

Lauded by contemporaries, including David Nicholls and Jo Jo Moyes, there’s light and dark in all Keyes’ novels, equal measures of hilarity and heartbreak. She has explored hard-hitting issues, from addiction to cancer, via bereavement and domestic violence – but thanks to her huge gift for humour, they are not depressing books. Far from it.

Meanwhile, her combined 386,000 followers on Instagram and Twitter tap in to her witty asides about love, life, handbags, make-up and shoes, along with references to Mammy Keyes (her mum) and Himself (her husband). Yet life hasn’t always been a laugh a minute for the 58-year-old publishing phenomenon.

The alcoholism of her wild 20s, which led to a spell in rehab, and a bout of depression little more than a decade ago, have been well-documented. She hasn’t had a drink for 28 years.

“I still go to meetings,” she says candidly. “That’s why I don’t relapse.”

And Keyes’ latest book sees her back in the thick of the subjects she knows so well – addiction, rehab, relationships and family.

Keyes vowed she’d never write a sequel to Rachel’s Holiday, which centres on the eponymous heroine, a cocaine addict whose family pays for her to go to the Cloisters, Dublin’s answer to the Betty Ford Clinic, which she claims she’s only agreed to because it’s time to have a holiday.

“Back then, addiction was something regarded as very shameful in a woman, and that it should be kept secret,” says the bubbly novelist, who made her own alcoholism public when her writing career took off in the mid-Nineties.

“I was so naïve. And so grateful I was no longer in the prison of addiction. I never felt it was something to be ashamed of. It meant that when people read the book, they were able to be more compassionate with themselves. So many people have contacted me to say they’ve got clean or sober from reading it, they stopped thinking of it as a moral failing and began to see it as it is, which is a condition that the person has no control over.

“Maybe a lot of people were shocked, but I never shocked myself.”

25 years after the iconic 1.5 million-copy bestseller #RachelsHoliday burst into our lives, Rachel’s BACK! Don’t miss out on #AgainRachel, out next week. Don’t forget you can get a SIGNED exclusive edition with @Waterstones -> https://t.co/knjXfIR9jD pic.twitter.com/Xhyawgwv32

A quarter of a decade on, recovering addict Rachel Walsh is back, in the sequel Again, Rachel, which finds her older and cleaner, working as an addiction therapist in the Cloisters, with a boyfriend, family and an enduring fondness for expensive trainers.

All is rosy, until her handsome ex-husband Luke arrives from America after his mother dies, and makes contact, upsetting the equilibrium of Rachel’s life.

There have been no such romantic complications for Keyes, who celebrated her 25th wedding anniversary to Tony Baines in 2020. They met at his 30th birthday party when he had a girlfriend and Keyes was mired in alcoholism. When she got out of rehab, they began seeing each other, initially as friends, but got engaged 11 months later.

He worked in IT and was the type of nice, kind man she’d avoided during her wild booze-filled years, but who has clearly given her the support and stability she so needed.

By her third book, Keyes had become the breadwinner and Baines has long been her PA, handling her media requests, proofreading her books and sorting out contracts and taxes.

She suffered crippling depression in 2009, experiencing suicidal impulses which she has since spoken about.

In a recent BBC TV interview she recalled how, when she told Baines she was ready to leave this world, he suggested they watch an episode of Come Dine With Me, and the diversion helped that moment to pass. The depression lifted around four years later, almost as quickly as it had arrived.

While she writes about other people’s romantic traumas and relationship problems, she and Baines rub along quite happily, she agrees. She cannot over-emphasise the difference he has made to her life.

“I’ve learned, in confrontation, to be more respectful. I catastrophise at the drop of the hat, he says ‘Let’s look at the facts’. He’s been very good for me and he’ll always give people the benefit of the doubt.”

Their Silver Wedding anniversary celebrations were curtailed by the pandemic, she recalls.

“In the beginning, we planned a party, then we planned that the two of us would go for dinner and in the end, we celebrated by me putting on the lovely dress I’d bought for the party and taking the bins out in it,” she quips.

During lockdown they started cooking together in their home near Dublin, she recalls.

“We’d do fancy things like Ottolenghi, and that was a lovely, uniting thing, which I’d never have wanted to do before. Instead of having dinner on our laps in front of the news, we started sitting at the table looking at each other, which was very nice.”

Keyes, who now co-hosts a podcast, Now You’re Asking, with Tara Flynn, believes she has changed in the 25 years since Rachel first came on the scene.

“The lovely thing about getting older is that the things that used to bother me when I was younger don’t so much any more, like an argument, or a snooty comment, or things that happen in traffic. I’m better at standing my ground, which just comes with living through things.”

There’s a big reveal in the latest book – not to give anything away – yet a particularly bleak event which might have you reaching for the tissues is tempered with Keyes’ trademark humour in other aspects of Rachel’s life, as she deals with her multi-faceted family, her loves past and present and an eclectic mix of patients.

The attitude to addiction now has changed since Keyes wrote Rachel’s Holiday, she agrees.

“As a recovering addict, addiction is mainstream. It’s not something that happens in the shadows, on the margins of life. The numbers of people addicted to alcohol, gambling, tablets, illegal drugs, food, whatever, there’s an awful lot of it.”

Unlike fellow authors David Nicholls and Jo Jo Moyes, Keyes’ work has not been adapted for the big screen, even though many of her books – Grown Ups, The Break, The Other Side Of The Story – have been optioned.

“Over the years, people have asked about film or TV adaptations and it’s never really happened. I knew that if I started getting excited about it, I’d end up disappointed. And I was right. All I can do is write my books and whatever happens happens.”

Again, Rachel by Marian Keyes is published by Michael Joseph on February 17th.