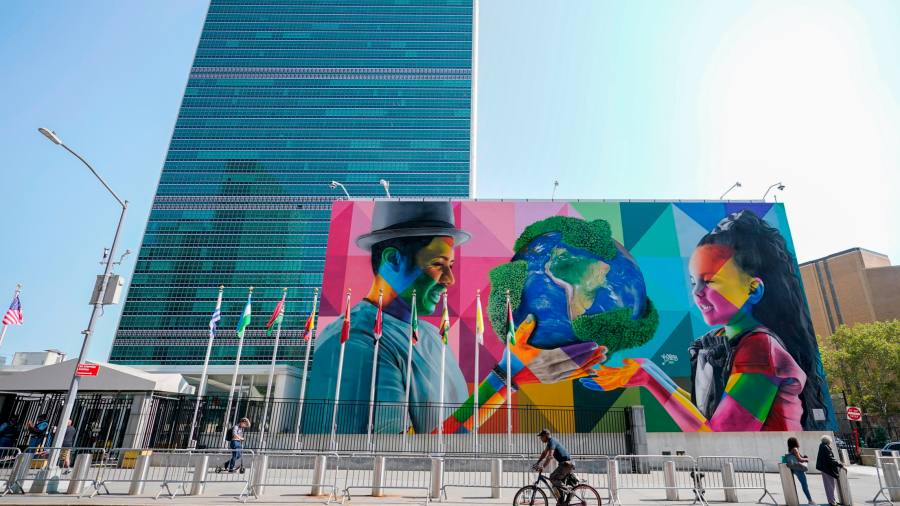 US climate envoy John Kerry called for the reform of international financial institutions over a failure to marshal funds related to climate change, but refused to be drawn on whether the Biden administration had confidence in the leadership of the World Bank.

Speaking at a climate week event held alongside the UN General Assembly in New York, Kerry said it was not for him to speak about the leadership of the World Bank Group, the largest and oldest of the multilateral banks.

The bank led by Trump appointee David Malpass has come under sustained criticism over its policies towards funding fossil fuel projects from those involved in the UN as well as climate experts such as former vice-president Al Gore, who again called for his resignation on Tuesday.

Kerry expressed frustration, however, about the role of the banks that provide loans and grants to poorer countries and are seen as crucial to distributing money to the developing world to help limit global warming as their economies grow.

He had “been pushing for months” for an overhaul of the financial institutions established as a result of the Bretton Woods agreement in 1944, including the IMF and what became the World Bank Group. A group of nations had discussed the matter at a meeting earlier on Tuesday, he said.

“We made it crystal clear that we all believe the time is passed, that we have to have major reform and major restructuring with respect to the [multilateral banks],” said Kerry.

The US is the largest World Bank Group shareholder and the only member nation that has a veto over certain changes in its structure.

The climate envoy also said the G20 deal was nearing a deal with Indonesia to finance its shift away from coal. “Indonesia will raise their climate ambition, and will try to deploy more renewables, and they will shut some coal,” he said at the New York Times climate week event.

UN secretary-general António Guterres told world leaders at the 193-member assembly earlier in the day that multilateral development banks “must step up and deliver” and that helping poor countries adapt to worsening climate shocks “must make up half of all climate finance”.

He strengthened his call for governments to impose a windfall tax on the profits of oil and gas companies, for the process to be redistributed to help countries harmed by climate change and those struggling with food and energy costs. He also attacked those who financed and acted for the industry.

“We need to hold fossil fuel companies and their enablers to account,” he said. “That includes the banks, private equity, asset managers and other financial institutions that continue to invest and underwrite carbon pollution. And it includes the massive public relations machine raking in billions to shield the fossil fuel industry from scrutiny.”

Norway’s sovereign wealth fund and a group of investors with more than $10tn under management led a series of corporate climate change pledges that are timed to coincide with New York climate week.

The world’s largest sovereign wealth fund said it would require the companies it invests in to reach net zero emissions by 2050 and to publish those goals by 2040 at the latest.

At present, only one in 10 of roughly 9,000 companies it has invested in have a net zero target, it said.

The $1.2tn fund, which is based on assets from Norway’s oil and gas revenues, has already sold out of coal producers and consumers as well as some oil explorers.

Institutional investors put another $2.5tn down

At the same time, the UN-convened Net Zero Asset Owner Alliance, a group of 74 institutional investors with $10.6tn in assets, said in an annual progress report that two-thirds of its members had committed to short-term 2025 decarbonisation targets. That represented an additional $2.5tn worth of assets that were covered by short-term targets, the group said.

Speaking to the Financial Times, alliance chair Günther Thallinger said the energy crisis had created a “very difficult context” that put action on climate change “under pressure” but backsliding must be avoided.

The alliance is part of the Glasgow Financial Alliance for Net Zero, a broad coalition of financial institutions that committed to decarbonising their portfolios at last year’s COP26 climate summit. The group and its members have come under pressure from campaigners for being too slow to act.

Thallinger, who helped found the Net Zero Asset Owner Alliance in 2019 ahead of the creation of Gfanz, said the groups needed to get away from “conceptual discussions” and start to “do the work”.

“We do not want to have concept on top of concept . . . This is something we are trying to communicate to other initiatives,” he said. Time and expertise should be focused on making the real economy cleaner and greener, rather than on writing “another new standard”.

On Tuesday, a report co-authored by the International Energy Agency estimated that annual investments of about $1tn in renewables would be needed to supply clean power to the world’s growing population and avoid the catastrophic effects of climate change.

The president of COP26, Alok Sharma, and members of the UN’s Race to Zero campaign will once again push financial institutions to eliminate commodity-driven deforestation from their portfolios by 2025, as part of a new report released at the New York climate week summit.

“Due to the unique role of deforestation in driving emissions, and the role of the standing forest and terrestrial ecosystems in mitigating carbon, the financial sector must front load its transition to net zero,” Sharma will say.

Sharma will hand over the presidency in a matter of weeks to his Egyptian counterpart, Mahmoud Mohieldin, who will host the COP27 UN climate summit in the first week of November.

Are you curious about the FT’s environmental sustainability commitments? Find out more about our science-based targets here