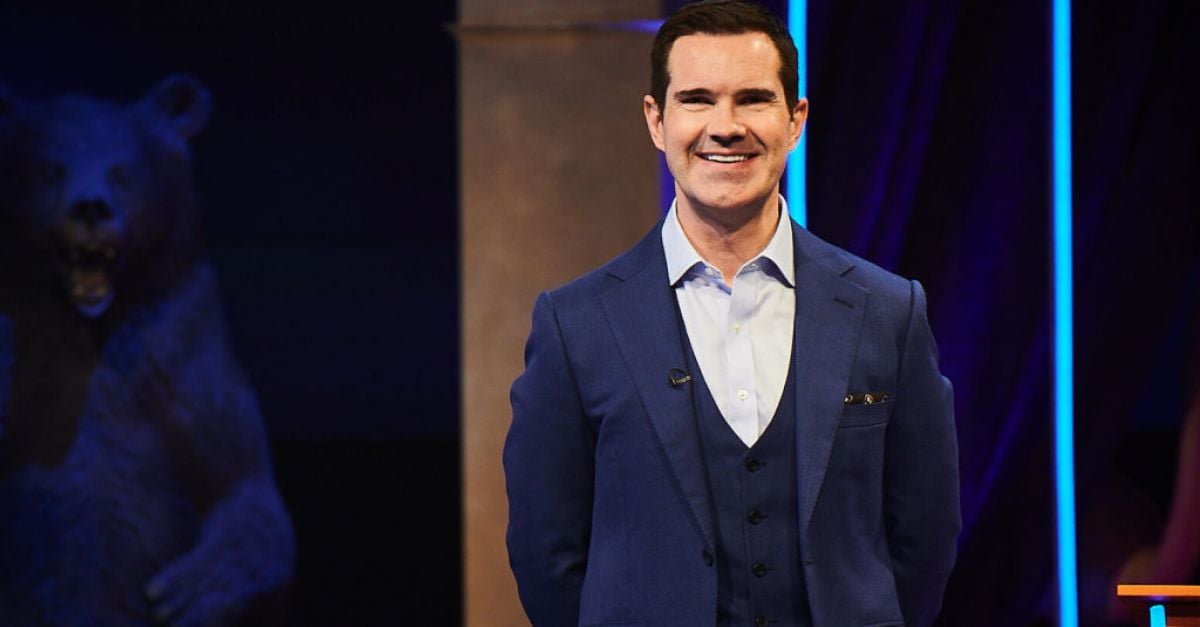 Jimmy Carr thought his new game show was a joke at first.

Called I Literally Just Told You, the format was created by former Blue Peter presenter Richard Bacon and will air on Channel 4.

And comedian Carr, 49 – who’s known for his stand-up and roles on shows like 8 Out Of 10 Cats – recalls it “was the most ludicrous pitch I’ve ever heard for a TV show”.

Why? Well, the questions he’s asking as the host are being written during filming – and they’re about something that has just happened while the show is being made. So, the contestants need to be constantly paying attention to get the answers right.

It’s a fun show for viewers to join in with from the sofa, but the competitors have the chance to win big money. If they correctly remember the things they’ve seen and heard minutes earlier, they can add more cash to their prize pot.

Then there’s the chaotic finale of each episode, where we see the remaining two contestants setting each other questions.

Here we catch up with Londoner Carr, who welcomed a son with partner Karoline Copping in 2019.

What makes I Literally Just Told You stand out as a game show?

“The contestants are crazy good. I don’t know where we found these people, but we searched high and low.

“It’s got an enormous play-at-home factor, which most game shows don’t have. Most game shows are binary, you either know the answer or you don’t – all you have to know for this show is what’s just happened. And we had real fun with the fact that anything can happen. You can have 15-second cameos, you can have false ad breaks, you can mess with people’s minds.”

“Yeah, the misdirects are good – it’s comedic. I think the best bit of the show is the end round. I’ve never seen another game show do that, where you go, ‘Oh, you’re setting each other questions’.

“We preyed upon the fact that when you come and do a TV show, you don’t know what’s normal. So we did some very abnormal things. Like, someone from Girls Aloud just walks through the room for no reason at all. It’s crazy, but it sort of works, because people just go ‘Well, I guess it’s telly – who knows?’

How good would you be as a contestant on this show?

“I’m used to being on stage and having to remember someone’s name from 50 minutes ago so that I could do a call back to that guy on stage while I’m doing the next bit. So, my memory is not bad.

Who would you like to see taking part in a celebrity version?

“The dream team for this would be hosts of the other TV shows because I always think when you’re the host of a TV show, you’ve got all the answers, and there’s a bit of smugness that comes with that. So, get [Phillip] Schofield who does The Cube, [Jeremy] Clarkson does Who Wants To Be A Millionaire? now – get him. Get Anne Robinson.”

It’s been a difficult couple of years. How has the Covid-19 pandemic affected you personally?

“I guess every comedian was given an ultimatum by management; you either do a podcast, or you write a book. I think I took the gentleman’s choice; I wrote a book [called Before & Laughter].

“And I was a full-time dad in the lockdown. I had a little baby two years ago. I never would have had that expansive time with my child, and I liked it an awful lot.”

Tell us more about the book…

“The book is basically everything I know about life. It’s like half biography and half self-help. There’s a weird thing where looking back on your life, you could just believe it was luck. But you make your own luck; you lean into what you’re best at, you work hard at where you think you might have the most success.

“The idea of the book is that it would emulate a day with me. I go straight in on serious stuff with friends. So, this book feels like it’s a fairly good approximation of what it’d be like to be my friend. I’m very proud of it.”

For today only my book Before & Laughter is £6 on Amazon… apparently that’s all they thought it was worth. Get it for your weird uncle or rude brother or even yourself this Christmas – anyone who could do with a life lesson from yours truly.https://t.co/xqjHhWsCzW pic.twitter.com/3v5cPfz6Uo

Has the rise of cancel culture changed the way you approach live comedy?

“Cancel culture has always been a thing. I think I have a duty to my audience, that people have booked tickets to see an edgy comic tell edgy jokes, so I’m going to do that. I’m performing to an audience that has paid to be there, and we have a lot of fun. And it’s – somewhat ironically, I suppose – a very safe space, a comedy show. It feels like that’s where transgressive comedy should live.”

You turn 50 next September. Do you have any worries about that milestone?

“I’ve had a reasonable amount of work done. They say you can’t avoid death and taxes – I’m doing my best to do both. I look terrific. Look at that skin – iridescent, beautiful!

I think it’s about life stage, not age, and I’ve got a young kid and I’m running around with him. I’ve never felt better.”

I Literally Just Told You starts on Channel 4 on Thursday, December 16th.