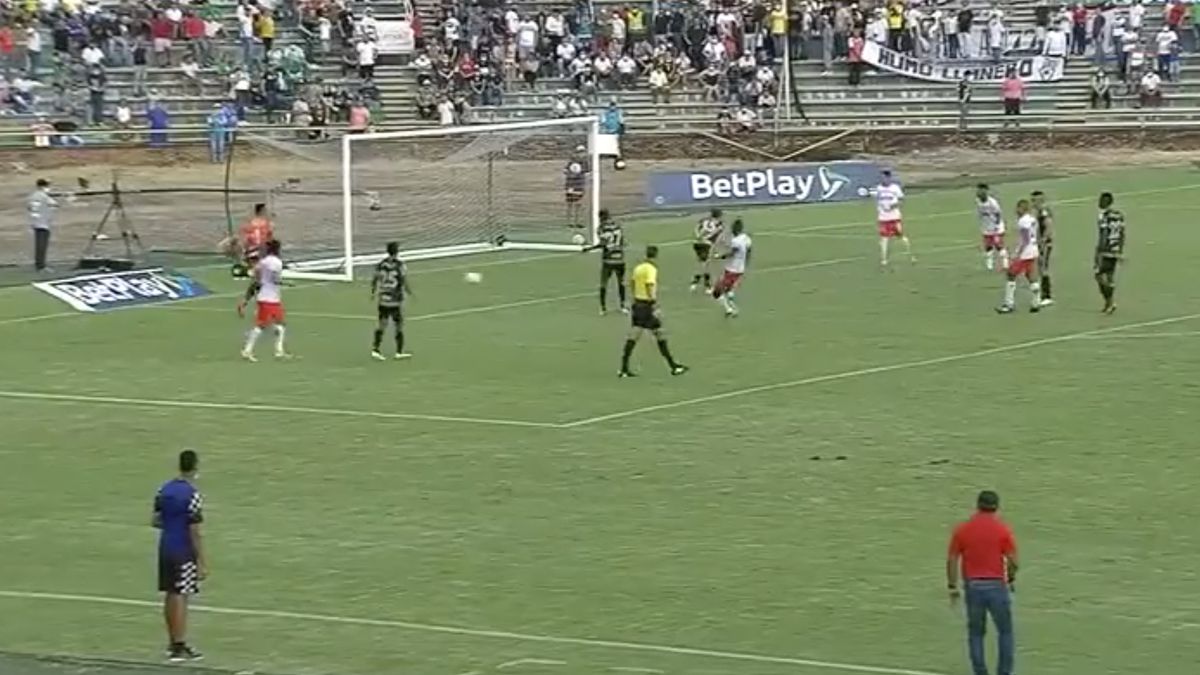 A wave of condemnation has been growing in Colombia since last Saturday, when in the final seconds of a decisive soccer game in the country’s second division defenders playing for Llaneros stood rooted to the spot while Unión Magdalena scored unchallenged in the 95th minute to seal an unlikely comeback victory and assure their promotion to the first division ahead of next season. The Colombian Professional Footballers’ Association has called for an investigation into the game, players representing the national team have voiced their anger and even the president of Colombia, Iván Duque, has described the affair as a “national disgrace.”

Llaneros, a team based in Villavicencio who have never played in the top tier, welcomed Unión Magdalena, one of Colombia’s traditional heavyweights, to the Estadio Bello Horizonte last Saturday and were winning 1-0 when the regulation 90 minutes had been played. The visitors went on to score twice in the final two minutes of stoppage time. The biggest victim was Fortaleza, another modest team who were the favorites to be promoted but who lost 2-1 at home against Bogotá FC, allowing Unión Magdalena to advance to the final of the second-tier Torneo II on December 11 and, in doing so, seal the final promotion slot to the first A division for the 2022 season.

The aftershock of Unión Magdalena’s win has sparked public debate and shaken the very foundation of the Major Division of Colombian Professional Football (Dimayor), the body responsible for organizing and operating the top professional divisions in Colombia.

The passage of play that led to the decisive goal, scored by Unión Magdalena defensive midfielder Jonathan Segura, who was left to his own devices in the penalty area by the Llaneros defense, was unprecedented. Footage of the goal swiftly went viral and left few observers devoid of suspicion. “Well, well, well, what a lack of respect in that Unión goal,” tweeted Juventus and Colombia winger Juan Cuadrado, one of Los Cafeteros’ senior players. Matheus Uribe, also a Colombia international who plays for Portuguese giants Porto, said it was “an embarrassment for Colombian soccer.”

“It’s difficult to film fiction about soccer and they managed it. Congratulations to the director. What? It was a real game? Unión Magdalena was losing against Llaneros, but scored two goals at minutes 90.5 and 90.6 to seal their ascent into the first division in Colombia.”

Nelson Flórez, the coach of Fortaleza, did not mince his words in his post-match press conference. “I am not ashamed to cry because I feel I have been robbed,” he said. Fortaleza announced they would ask the authorities to annul the game. “We do not believe that this is a simple gambling matter, but has a deeper undercurrent that we are sure the authorities and the players involved will confirm, respecting the due process applicable in this type of case,” the club said in a statement.

The scandal has transcended players, coaches, club executives and soccer fans, with anger and disbelief moving up the ladder from authority to authority, from local federations to national ones, all the way up to the president of Colombia. “The incidents that occurred in today’s game do not represent us as Llaneros or the sportspeople of our region. It is vital that the matter is cleared up swiftly,” said the mayor of Villavicencio, Felipe Harman, on Saturday.

Llaneros is the only professional soccer team in the Meta department of Colombia, which lies to the east of the Andes and is characterized by the extensive grassland plains, Llanos, from which the club takes its name. “The pain and anger I feel as a fan having witnessed the end of the game, leads me to demand clarification over what we saw yesterday,” added the governor of the department, Juan Guillermo Zuluaga.

What we as Colombians have witnessed is nothing short of outrageous, it is a national and international disgrace

Meanwhile, executives at both clubs have tried to play down the winning goal as a natural occurrence within the game, with “demoralized” players switching off after conceding the equalizing goal in a move that they believe should have been flagged for offside.

However, this has done little to dampen the controversy. “What we as Colombians have witnessed is nothing short of outrageous, it is a national and international disgrace and a matter that worries us greatly, and which reflects something that must be dealt with and resolved swiftly,” said Colombian Minister of Sport Guillermo Herrera, who has called on the Office of the Attorney General of Colombia to investigate possible corruption in the result of the match. “What took place in the first division promotion game is a national disgrace. Sport requires transparency, honesty and zero tolerance against any situation that undermines sporting ethics,” the president of Colombia, Iván Duque, said on Sunday.

Although the outcome of the situation remains up in the air, Dimayor has called a meeting to discuss the matter and has not ruled out suspending Unión Magdalena’s promotion to the top flight. “The idea is to take this as far as it needs to go so that it does not remain hanging there like so many other things do. We want to get to the bottom of this to ascertain if this was individual behavior on the part of some players or if there is something much more serious behind it all,” Dimayor president Fernando Jaramillo told Colombian daily El Tiempo.

Colombian soccer has been plagued by scandal in recent years. Luis Bedoya, former president of the Colombian Football Federation (FCF), has accepted charges brought in the US for his implication in the global corruption scandal known as FIFA Gate, a wide-ranging investigation into 20 years of bribes to senior soccer officials in exchange for the awarding of broadcasting deals for major international tournaments, including the Copa América, the Gold Cup and World Cup qualifying competitions.

The FCF has also been rocked by another scandal involving the illegal resale of tickets for the Colombia national team’s qualifying games ahead of the 2018 World Cup in Russia. On top of that, the Llaneros-Unión Magdalena controversy comes at the same time that the Superintendency of Industry and Commerce (SIC) is investigating an alleged agreement between 16 Colombian soccer teams and Dimayor to veto certain players. As such, the timing of the suspicious promotion game has provoked reaction from the authorities. “Between this and ongoing complaints over the management of players’ sporting rights, we demand that Dimayor and the FCF provide guarantees of transparent operation,” said Sports Minister Herrera.