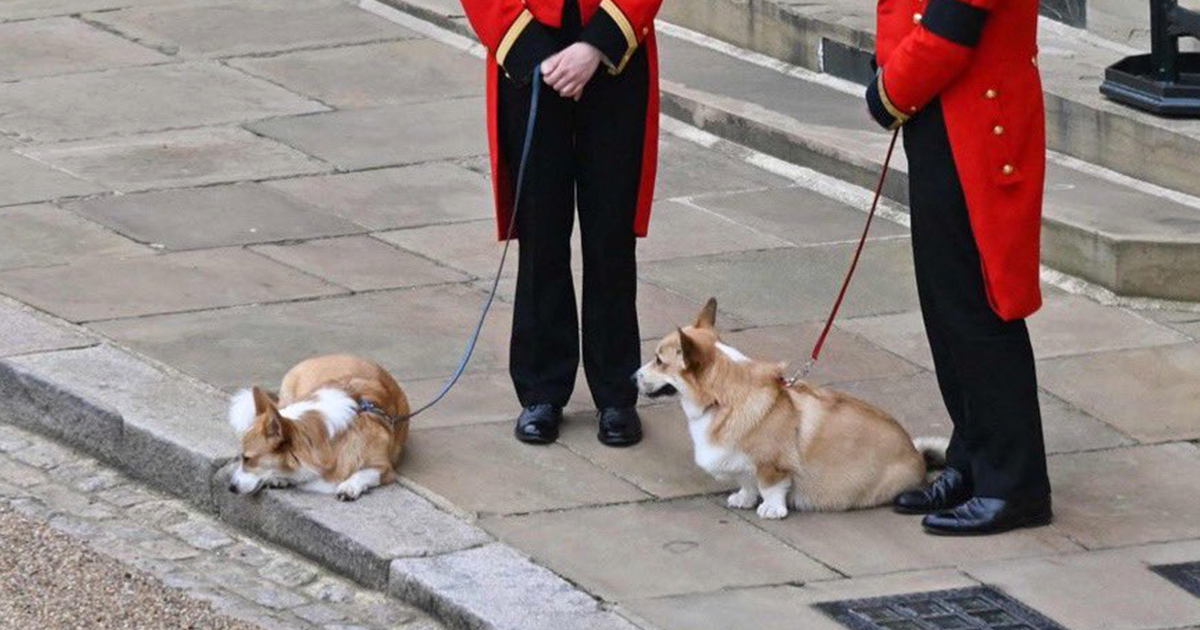 An interaction, a failed marriage, a university degree, a childhood home, a beloved piece of clothing, a teddy bear, a parent. The differing levels of meaning for each interaction are astounding, and yet they fulfill the same purpose—to mark the end. Goodbyes are final in one way or another, but it becomes tragic when we realize that some don’t understand or fathom the notion.

Such as pets. One day they’re lying on the warm lap of their beloved owner, the next—they’re no longer there. Where did they go? When are they coming back? Those questions cannot be answered, and the situation is difficult to explain when the language spoken is so different.

Thus, it was both lovely and heartbreaking to see Her Majesty Queen Elizabeth II’s corgis were brought to her funeral procession in the hopes that they could say their last goodbyes. The Queen’s pony Emma also stood by with handlers to honor the monarch, and it tugged at the hearts of many observers.

The royal corgis, Muick and Sandy, were escorted by two royal aides to Windsor Castle to await the funeral procession of their beloved Queen Elizabeth II

Queen Elizabeth II passed away on 8 September, aged 96. The royal corgis, Muick, who was named after a favorite spot near the Queen’s summer retreat of Balmoral Castle, and Sandy, were escorted by two royal aides to Windsor Castle to await the funeral procession of their beloved owner.

At the time of her death, the Queen also had two other dogs—a dorgi called Candy, and Lissy, a cocker spaniel. Prince Andrew was seen speaking to the aides and giving the corgis a sympathetic pet as he drew a breath before returning to the committal service.

The Queen’s love for corgis was well-known and documented throughout the years, becoming a symbol of British royalty all over the world.

It is believed that she raised more than 30 of them, according to estimates, her first one being brought in by her father King George VI when she was seven.

The dogs will live out the rest of their days with Prince Andrew and his former wife Sarah, Duchess of York, at their Royal Lodge

Although there were rumors that the pups would be put to sleep and buried with the Queen, we’re glad to say that’s very much untrue; the dogs will live out the rest of their days with Prince Andrew and his former wife Sarah, Duchess of York.

They were the ones who gifted one of the pups to the Queen back in 2021, following the death of the Duke of Edinburgh. Now, they will be taking care of the dogs at their Royal Lodge, which they continue to share after their divorce.

The Queen’s Fell pony, Carltonlima Emma, also stood by with handlers to honor the monarch for the last time. The Queen continued to ride Emma well into her 90s

But the pups weren’t the only ones present for the procession. The Queen’s Fell pony, Carltonlima Emma, also stood by with handlers to honor the monarch for the last time.

She was spotted on the side of the road, accompanied by the Queen’s last stud groom and manager to Her Majesty The Queen, Terry Pendry, who’d held the position for the past 25 years, both watching as the Queen arrived at Windsor Castle on Monday afternoon.

Daily Mail reports that in 2020, the royal groom said Emma had “been a wonderful servant to Her Majesty and is still going strong at the age of 24.” The Queen was a patron of the Fell Pony Society, and continued to ride Emma when she was well into her 90s.

Queen Elizabeth’s love for corgis was documented throughout the years, even becoming a symbol of British royalty recognized all over the world

The monarch’s beloved corgis lived a life of luxury that few pets could ever hope to experience. When at Buckingham Palace, the dogs slept in raised wicker baskets in a special boot room near the royal apartments. Their diets consisted of fillet steak and chicken breast cooked by a chef.

The carefully prepared meals were then delivered by a footman and covered with gravy which was poured by the monarch herself. The dogs never ate tinned food and were even given homeopathic remedies when they were ill.

In 2018, Richard Kay revealed that each of the Queen’s Corgis were buried on her royal estate. The actual burial was performed by Her Majesty’s head gardener while she oversaw the sad moment. Each of her beloved pups also received a headstone to commemorate their life as a loyal royal companion.

In 2015, it was reported that the Queen was intentionally not planning to add more dogs to her brood. After one of her last corgis died in 2012, she told horse trainer Monty Roberts that she didn’t want to have any more young dogs because “she didn’t want to leave any young dog behind.”

It is believed that she raised more than 30 corgis, her first one being gifted to her and her sister Margaret by their father King George VI when Elizabeth was seven

Tens of thousands of people lined The Long Walk and applauded as the flower-covered hearse carrying the late sovereign’s coffin slowly moved towards her Berkshire castle, where she spent most of her final years before her death at Balmoral. Silence fell among the mourning as the hearse moved to the final stretch of her journey.

The service, with a strong thread of tradition running throughout, was discussed with the Queen over a number of years, and all the prayers and hymns were chosen by her—apart from one. The Queen left one hymn to be chosen at the time.

The monarch’s beloved corgis lived a life of luxury that few pets could ever hope to experience, with fancy beds close to the royal quarters and chef-made meals

After a discussion between the King and the Dean of Windsor David Conner, the hymn chosen was Westminster Abbey, adapted from the Alleluyas in Purcell’s O God, Thou art my God. Other pieces included J.S. Bach’s Schmucke Dich, O Liebe Seele—Adorn Yourself, O Dear Soul—and Vaughan Williams’ Rhosymedre, a favorite with the royal family.

Much of the music at the service was composed by Sir William Harris, who served as the organist at St George’s Chapel between 1933 and 1961, taking in much of the Queen’s childhood. The young Princess Elizabeth would often visit the organ loft to watch Sir William play, and it is believed he taught her to play the piano.

We wish the pups all the best and hope that they will not feel at a loss without their Queen. We wish the Royal Family strength during this time

With the Dean of Windsor saying, “Go forth upon thy journey from this world, O Christian soul,” the Queen’s coffin was lowered into St George’s Chapel’s vault. After the final public element of her funeral, Her Majesty will be buried with her late husband Prince Philip in the King George VI Memorial Chapel.

You can watch the moment here

The Queen’s corgis, Muick and Sandy, sit in the forecourt of Windsor Castle to greet Her Majesty. pic.twitter.com/H02sPv17mY

We wish the pups all the best and hope that they will not feel at a loss without their Queen. We also wish all those grieving and Her Majesty Queen Elizabeth II peace. It is time for you to rest with your beloved and your dozens of pups in the land beyond.

People have expressed their love for the pups. Let us know your thoughts in the comments!