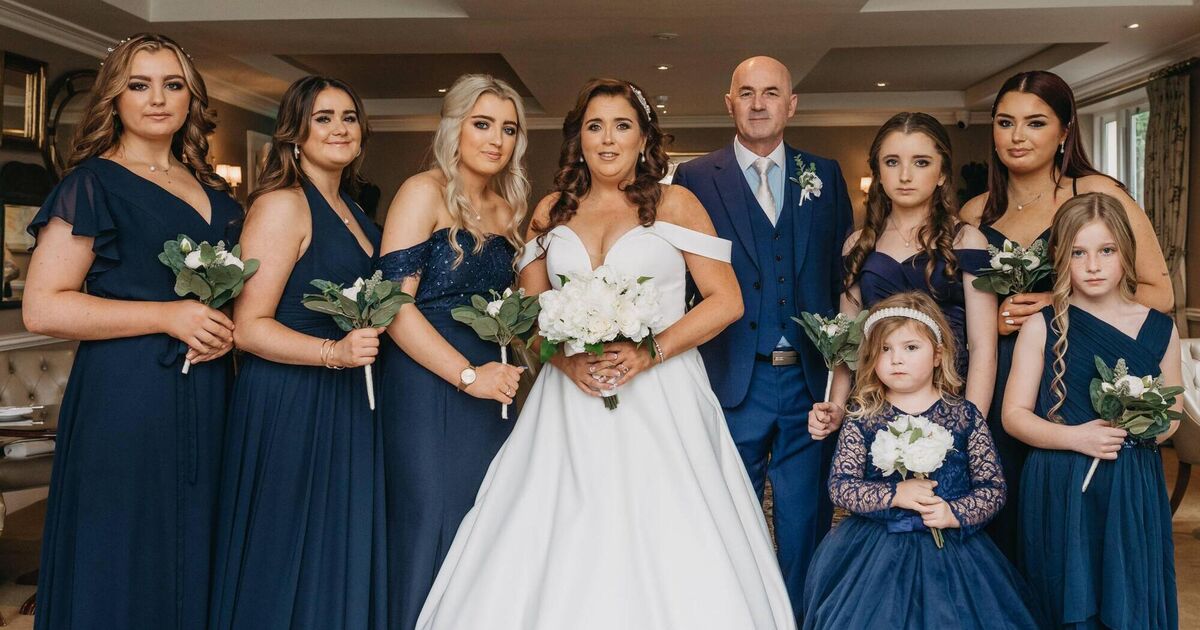 Gillian Healy and Thomas Dineen first met on the college run — and Tom even proposed on the faculty gates.

Their daughters additionally performed a key function when Gillian and Thomas exchanged vows final November — Alexandara, Heather, Abi and Robyn MacNamara have been the bridesmaids whereas Vivienne Dineen was the perfect individual.

“We met at Gaeilscoil Mhic Easmainn in Tralee, where our children attended school, in 2008,” says Gillian.

“Tom even proposed outside the school gate where we first met.”

Gillian, from The Kerries East, Tralee, Co Kerry, and Thomas, from Glenderry, Ballyheigue, Co Kerry, have been wed in The Boathouse on the Sheen Falls Lodge in Kenmare, Co Kerry, by Aine Brosnan, registrar.

The reception occurred within the William Perry Suite within the five-star venue. “We wanted a small family wedding with close friends and were guided by Sheen Falls’ wedding coordinator, Clodagh Ryan. We both fell head over heels in love with The Boathouse — and our wedding from start to finish was absolutely five-star,” says the bride.

The couple’s nieces, Élena and Autumn Cronin, have been the flower women and Harrison O’Neill, grandson, was the pageboy.

“The main focus was to involve the children — or should I say young ladies — as much as possible,” says the bride.

The close by river with at nearly full tide at 2pm when the ceremony started, provides Gillian, “so the scene was absolutely breathtaking”.

“Our wedding singer, Eve Stafford, soprano, from Limerick, along with Kieran Collins on the violin and Sinead Ryan on the harp gave what was like a private concert to our guests before the wedding party made an entrance,” she says.

“Four of our daughters made a speech separately to tell both us and our guests how their lives have blossomed since our families joined together and our daughters spoke of the happiness Tom has brought to my life and I have brought to his. It was very emotional and I think they had our guests in tears for most of it,” says Gillian.

“Just before dessert was served we had a 15 minute-clip from the fantastic Bernard Casey, comedian and actor, and Jason Fahy entertained the guests on guitar. From the first dance on there wasn’t a space to be found on the dance floor,” says the bride.

“When Jason finished Kevin Healy-Rae, local DJ, entertained us all.”

The youthful friends have been significantly welcome.

“My sister Erica had given birth to her baby girl Freya only four weeks before the wedding and made a huge effort to come with her husband David and our two flower girls Elena and Autumn. My youngest sister Geri had her baby boy Roman just eight days before the wedding so unfortunately she wasn’t able to attend but we kept her busy on Facetime,” provides Gillian.

Gillian sourced her marriage ceremony gown in Aibheil in Adare, County Limerick, and the bridal hairstyling was by Chanel Hurley of The Coco Cottage with make-up Becky Spencer.

The bride and groom, who reside in Kilmoyley, Ardfert, County Kerry, went to Saint Lucia on their honeymoon.