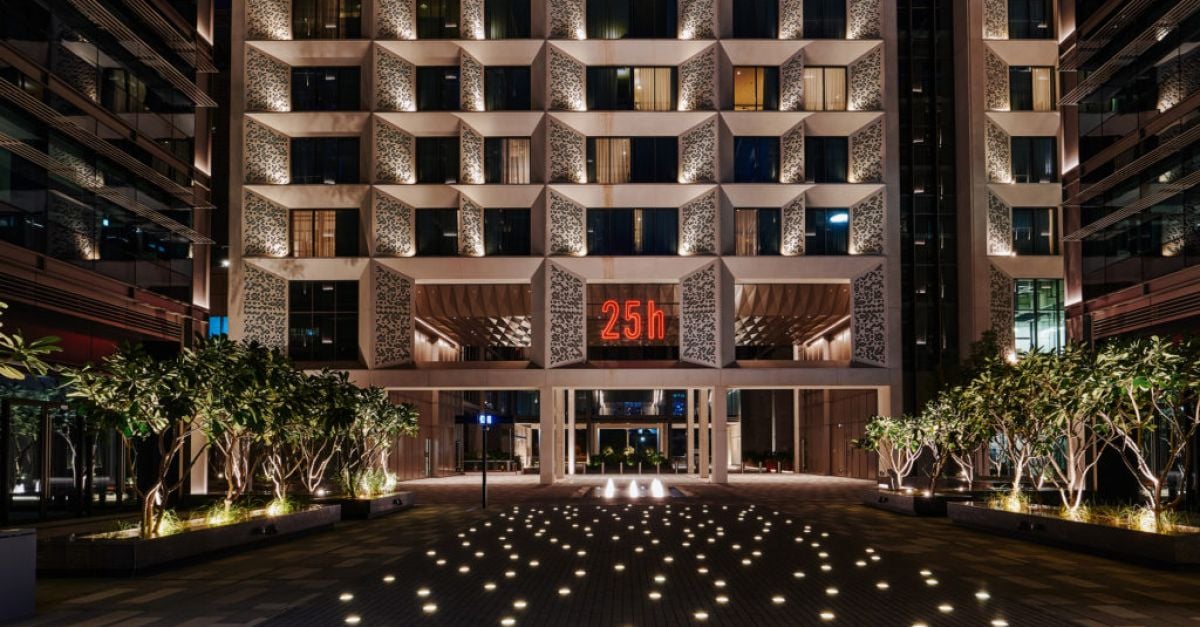 Best known for their fun-loving, offbeat hotels found in major cities across Europe, the 25hours brand has launched in Dubai with a hotel promising to blow the sparkly brass taps off the UAE’s signature five-stars.

Close to the Dubai World Trade Centre and in view of the long-awaited Museum Of The Future, it’s well located for work and play, with a host of features designed to attract a new generation of digital nomads.

But does reality match the hype?

Honouring the art of the hakawati (an Arabian storyteller), every nook, corner and shelf-space of this talking-point property has a tale to tell. It’s impossible to walk far without being distracted by a retro ghetto blaster, a gramophone or vintage toy car. A mishmash of antiques, kitsch bric-a-brac and old heirlooms, showpieces were sourced by staff from junk and second-hand stores across Dubai.

But even though there are 434 guest rooms in the building, nothing feels mass produced.

Each floor represents an era in Dubai’s history; mine was dedicated to the Bedouin, with sand-coloured carpets and brass trinkets dangling from the walls.

From enormous hanging chairs in the lobby to dainty handmade dioramas in lifts, artworks are displayed all over the hotel. Look out for the cloud-covered globe spinning in the lobby. It was designed by Myneandyours, a muralist whose fluffy motifs can be found across town.

There are cool things you can borrow

A tangle of looping highways and buildings so tall they block out the sun, this isn’t the easiest city to navigate. But the staff at 25hours are on hand to help. Once the concierge team have pinpointed recommendations on a map, guests can borrow a power pack to ensure mobiles never run flat.

A fleet of Minis parked outside can be loaned for four hours per stay (sometimes more, depending on availability) while a selection of Berlin-built Schindelhauer bikes chained to railings around the property (and even in some suites) are available for those who dare to explore on two wheels.

If you fancy a creative night in, a travelling trunk containing a podcast recording booth can be delivered to your room. Alternatively, indulge in some good old-fashioned reading by picking up one of the 10,000 books displayed on shelves, in grocery barrows or around the lobby’s Fountain of Tales.

Rooms are for more than sleeping

Yes, the beds will swallow you whole, making it impossible to leave – but pillows and duvets aren’t the only in-room indulgence. A macramé swing took centre stage in mine, along with a very comfortable desk with plenty of USB ports. Far less practical but infinitely entertaining was an analogue phone in the loo.

Faithful to the destination, a copy of the Quran and a prayer mat can be found in the wardrobe, while a street art motif of a compass on the ceiling shows which way is east.

The party suite will make you sheikh, rattle and roll

Nowhere does decadence better than Dubai, as demonstrated by the penthouse Hakawaki Suite at 25hours. Large enough to host a DJ booth and a dance floor, it’s playfully OTT. The star feature is a triple sheikh-sized bed with a bespoke single duvet, complemented by a bathroom with two side-by-side roll-top tubs. A secret staircase leads to two further bedrooms – great for nannies or a clandestine rendezvous.

There are plenty of places to play (or work)

An oasis in a financial district crafted from concrete and steel, the plant-filled top floor of 25hours is an exotic hideaway in the sky. Several wooden pods feature the first mixed gender saunas in Dubai, while a pool with sunbeds is a place to soak up urban views and sun.

Get ready for the evening with a trip to the spa, a workout in the semi open-air gym or a new hair do with celeb hairdresser Wassim Steve.

Based on a sister venue overlooking Berlin Zoo, the Monkey Bar serves fabulous drinks in a jungle of fake plants, with a view overlooking the yet-to-open Museum of the Future.

But if you prefer arts and crafts to cocktails and craft beers, head downstairs to a dedicated pottery studio, where classes (with wine) are held. Stop at the Analogue Circus to spin one of 500 vinyl LPs on a selection of decks, or indulge in Eighties cassette classics at a Walkman carousel.

A selection of cool co-working spaces and Zoom booths make logging on less of a chore. One meeting room even comes with a sandpit for those worried about missing precious time at the beach.

When your hotel teams up with the hottest talents in town, there’s good reason to hang around a bit longer.

During the day, the legendary Nightjar coffee team offer cold brews on tap in a courtyard strewn with cushions. At night, choose between northern Indian cuisine at Tandoor Tina or German draught beer and sausage snacks at Ernst Biergarten – one of the few premises in Dubai to be granted a pork licence.

How to plan your trip

Rooms start from £170 per night with breakfast. Visit 25hours-hotels.com.