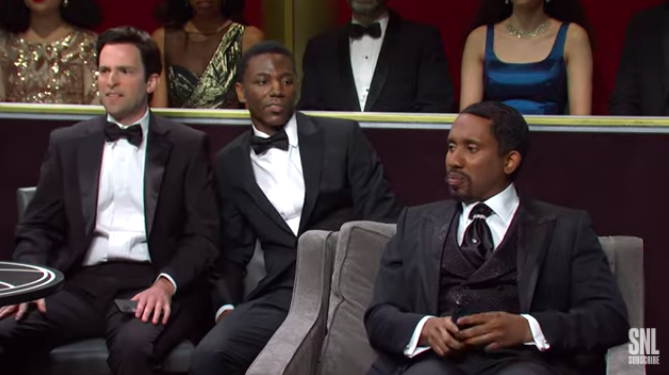 It was anticipated that Saturday Night Live would deal with the Oscars slap between Will Smith and Chris Rock, and so they did⁠—however from an viewers’s perspective.

In the sketch, a seat filler (Jerrod Carmichael) approaches Smith (Chris Redd) to inform him how large of a fan he’s and asks for a selfie earlier than the onstage incident. But after the slap, the seat filler’s pleasure dissipates and he tries to distance himself from the actor who’s pretending all the pieces is regular.

“So where are you from?” Redd’s Smith asks Carmichael earlier than shouting, “keep my wife’s name out your fucking mouth” to an off-camera Rock.

When Smith brings up doing the selfie, Carmichael declines saying, “I deleted my phone.”

Not lengthy after, one other seat filler (Kyle Mooney) returns questioning what he missed. While Mooney scrolls by his telephone, Smith introduces himself and asks for his title. But Mooney rapidly realizes what he missed and tries to distance himself replying, “They didn’t give me one.”

By the tip of the sketch, a happy-go-lucky Smith is dancing to his 1997 hit “Gettin’ Jiggy with It,” which he did in actuality on the Vanity Fair Oscars social gathering after taking dwelling the Best Actor win for his main function in King Richard.

On SNL this week, the slap was a central matter and was featured within the Weekend Update, chilly open and in Carmichael’s opening monologue.