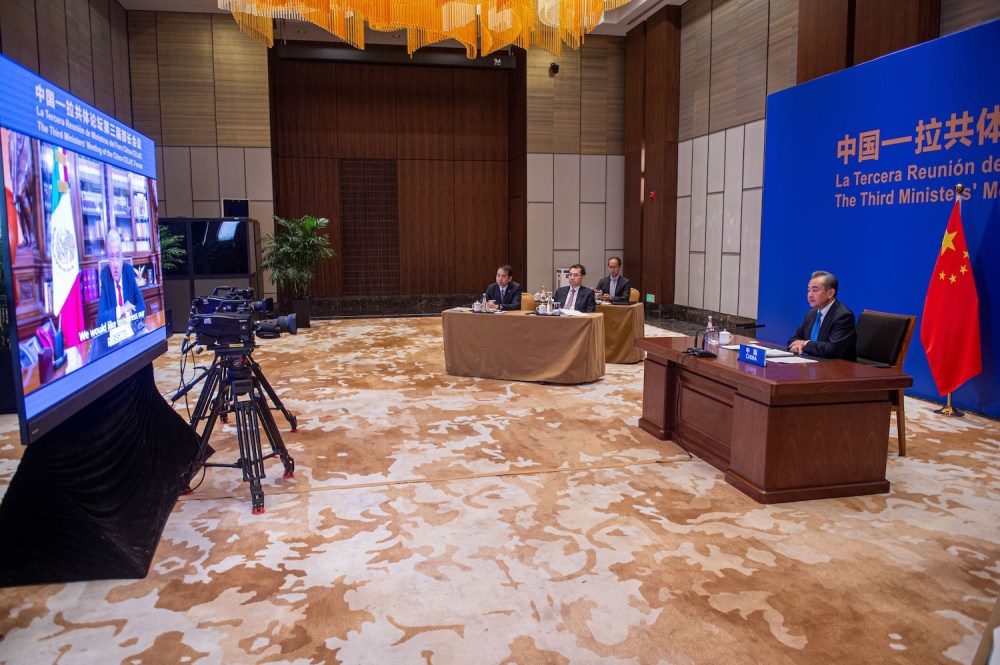 The highlights this week: Latin American officials do summitry dances with both Beijing and Washington, the “Remain in Mexico” program is expanded, and the U.S. Treasury department confirms Salvadoran President Nayib Bukele’s deal with drug gangs.

If you would like to receive Latin America Brief in your inbox every Friday, please sign up here.

How to Navigate a New Cold War

For Latin American officials, the past week has been bookended by two contrasting summits—both virtual. Last Friday, on Dec. 3, regional foreign ministers met with Chinese officials and watched a video address by Chinese President Xi Jinping at the third China-Community of Latin American and Caribbean States (CELAC) ministerial meeting to be held since 2015. And this Thursday and Friday, Dec. 9 and 10, some Latin American delegates are participating in U.S. President Joe Biden’s Summit for Democracy, to which China was pointedly not invited.

Since assuming office in January, Biden has frequently described global geopolitics as a battle between autocracies and democracies. That framing that has some Latin American policymakers worried Washington will pressure them to choose sides in an effort to decouple U.S. economic ties from China. Indeed, the United States in recent years has put heavy pressure on countries ranging from Chile to Panama to scrap Chinese investment projects, with some success.

Yet the participation of most Latin American foreign ministers in the China-CELAC forum last week is a sign that regional countries continue to value their relationship with Beijing.

After the summit, Ecuador’s foreign minister tweeted in appreciation of “extraregional cooperation” and reiterated his thanks for Chinese help with Ecuador’s COVID-19 vaccination effort. Late last month, Colombian President Iván Duque said “relations between Colombia and China are at their best point.” And in June, Colombia’s ambassador to China said Colombia aims to join Beijing’s Belt and Road infrastructure initiative.

Both Ecuador and Colombia are led by center-right presidents who have also worked to maintain positive ties with the United States. Colombia in particular has historically been the largest recipient of U.S. aid in Latin America and has long been considered a strategic partner by Washington.

Boston University political scientist Jorge Heine told Foreign Policy these stances are examples of an approach he and several fellow scholars call “active nonalignment.” It’s a strategy that can allow Latin America not only to survive U.S.-China tensions but also to benefit from them, they write in the new book Active Non-Alignment and Latin America: A Doctrine for the New Century.

Heine is a former Chilean diplomat, and his co-authors include former foreign ministers of Argentina, Brazil, Chile, Mexico, and Peru. They urge Latin American nations to strengthen regional integration and work to benefit from ties to both China and the United States—while avoiding being controlled by either. This is similar to the European Union’s current trade mantra of “strategic autonomy,” which advocates for commercial relationships that keep the EU competitive and give it geopolitical influence.

Latin American countries “should look at their own interests and put them front and center, rather than being tempted by aligning themselves with one power or the other,” Heine said. “This is not a zero-sum situation.”

Of course, plenty of Latin American leaders are doing the opposite—particularly Brazilian President Jair Bolsonaro, who pulled Brazil out of CELAC last year amid efforts to reorient Brazil’s foreign policy toward Washington and thus did not participate in last Friday’s summit.

Brazil’s massive commercial ties with China have endured during the Bolsonaro administration thanks to their importance to both economies as well as to efforts guided by Vice President Hamilton Mourão, Chinese diplomats, and Brazil’s business community. But Bolsonaro’s anti-China rhetoric has left scars on the country—including through xenophobic harassment of its Chinese community.

The China-CELAC conference offered some clues as to how Beijing’s relationship with Latin America could evolve in the years ahead. A new joint action plan announced for the 2022-2024 period pledges cooperation in areas including infrastructure, education, and green energy, though it provides no specific financial targets. Unlike at last month’s Forum on China-Africa Cooperation, Xi did not pledge a specific level of Chinese investment in Latin America in the coming years.

At the first China-CELAC forum in 2015, Xi said Chinese firms would invest $250 billion in Latin America by 2025. Between 2015 and 2020, combining announcements of new projects and purchases of Latin America firms, that total had reached around $76 billion, according to Boston University’s Global Development Policy Center.

Rio de Janeiro State University professor Mauricio Santoro told Foreign Policy that Chinese direct investment in the region “will probably grow back again, but I’d say not at the same pace as before, because Chinese economic policy is increasingly focused on stimulating the growth of China’s domestic market.”

Globally, it’s a similar story: Overall investment flows to emerging markets are drying up. In November, excluding flows to China, they turned negative for the first time since March 2020.

That makes the savvy active nonalignment of some Latin American governments especially important. The Biden administration has said it will make infrastructure funding for developing countries available through its new Build Back Better World initiative. If Latin American countries are strategic, Heine said, they can use both continued Chinese investments and potential new U.S. funding to boost their recoveries during what remains a devastating economic crisis.

Monday, Dec. 13: The deadline for congressional candidates in Colombia to register for next year’s general election. 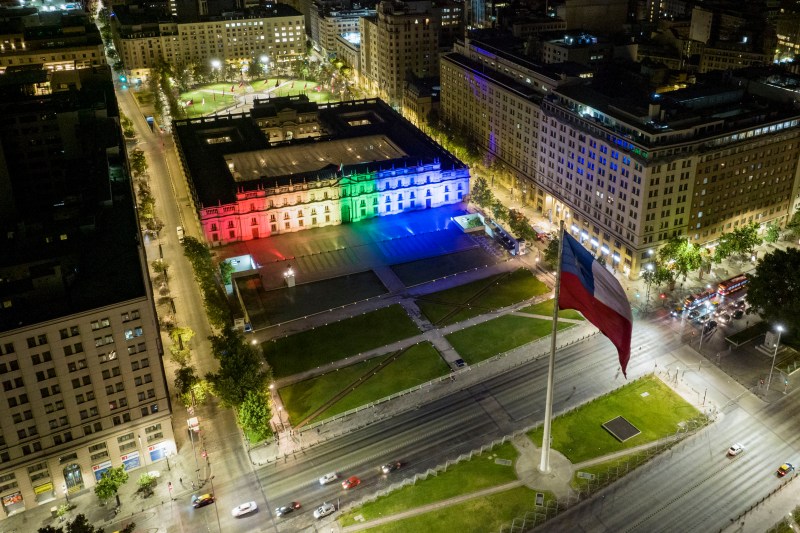 The La Moneda presidential palace in Santiago is illuminated after the passing of a bill to legalize same-sex marriage in Chile on Dec. 7. JAVIER TORRES/AFP via Getty Images

Chile was the last country in the Western Hemisphere to legalize divorce, in 2005. Progressives celebrated Tuesday’s news, but with somewhat bated breath. The country approaches a razor-sharp presidential runoff on Dec. 19 between leftist Gabriel Boric and far-right candidate José Antonio Kast. Kast said he disagreed with the new law.

Blow to Guaidó. In a major setback to Venezuela’s political opposition, the foreign affairs commissioner to prominent opposition figure Juan Guaidó resigned on Tuesday, saying the shadow government Guaidó had tried to lead since 2019 had become “deformed.”

In 2019, more than 50 countries recognized Guaidó as Venezuela’s president, rather than Nicolás Maduro, due to irregularities in Venezuelan elections that year and Guaidó’s then-position as head of the country’s congress. But Guaidó has since lost support both domestically and internationally. The United States is one of the handful of countries that still recognizes him as Venezuela’s head of state.

Bukele’s deal. The U.S. Treasury department said Wednesday that Salvadoran President Nayib Bukele cut a deal with the drug gangs MS-13 and Barrio 18 in 2020 in which they agreed to reduce violence in exchange for financial support, including cellphones and prostitutes for top gang leaders. Homicides in El Salvador fell by 44.9 percent between 2019 and 2020, according to official statistics, a drop that Bukele attributed to his “territorial control plan” of putting more police on the streets.

Salvadoran news site El Faro first reported the existence of the secret talks, but Bukele denied the claims. He responded via Twitter on Wednesday to the Treasury Department statement, saying, “How can they put out such an obvious lie without anyone questioning them?”

“Colombia’s government reported that at least 465 children underwent recruitment between 2016 and 2020, though by all accounts, this is a huge underestimate,” she writes. One school in the town of Tumaco was so worried about the risk of child recruitment that it chose not to shut down at all during the pandemic.

Chinese-Peruvian fusion. Lima, Peru, has roughly the same population as New York City but more than double the number of Chinese restaurants, chef Nico Vera writes in an essay for the Cleaver Quarterly. Chinese descendants make up some 5 percent of Peru’s population, by one estimate. Vera reports that Chinese and Peruvian culinary traditions are so closely intertwined in Lima that residents call ginger by a word related to its Cantonese name, kion, rather than its Spanish name, gengibre.

The physical proximity of Lima’s Chinatown to the city’s central market was key in fostering the culinary fusion of what Peruvians call chifa food. Chicken breasts were coated in Andean potato flour to be battered and fried, Andean guinea pig was bathed in oyster sauce, and Andean corn kernels topped stir-fried noodles. Vera writes that chifa is the comfort food that sustained him in a move from Lima to the Dominican Republic and then on to Canada.

On average, schools around the world were closed for 14 weeks due to the pandemic, according to January 2021 calculations by the United Nations Educational, Scientific, and Cultural Organization (UNESCO). What was the average in Latin America and the Caribbean?

In Focus: ‘Remain in Mexico’ Resumes 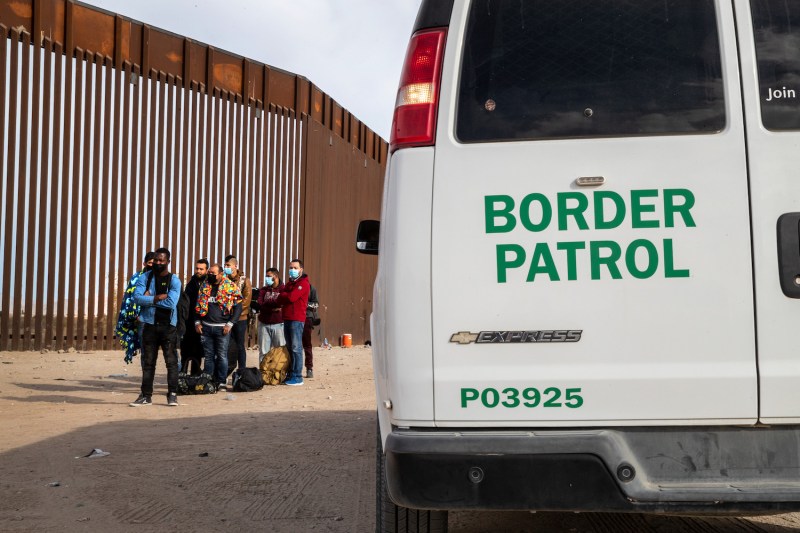 Immigrant men are taken into custody by U.S. Border Patrol agents at the U.S.-Mexico border in Yuma, Arizona, on Dec. 7.John Moore/Getty Images

On Wednesday, the United States sent the first asylum-seekers who had been detained in El Paso, Texas, back into Mexico to await their immigration court dates since the restart of the Migrant Protection Protocols (MPP) program on Monday.

Better known as “Remain in Mexico,” the policy was begun by the Trump administration, ended by the Biden administration, and then ordered to recommence by a Texas judge in August.

During the program’s first run, MPP forced over 70,000 asylum-seekers who were encountered at the southern U.S. land border to wait in Mexico while their cases were processed. In Mexico, these migrants faced over 1,500 cases of murder, rape, and other violent assaults, according to the nongovernmental organization Human Rights First. Though Remain in Mexico first only applied to Spanish-speaking migrants, Brazilians were added in January 2020.

Despite the August ruling, the program’s actual resumption hinged on Mexico agreeing to cooperate with U.S. authorities. Last week, Mexico reached a deal with the United States to restart “Remain in Mexico” on conditions that the U.S. would make several new provisions for asylum-seekers, including a six-month maximum timeline on asylum decisions, increased access to legal protection, and COVID-19 vaccines.

Even so, dozens of U.S. and Mexican legal aid groups that assisted migrants under the program’s last iteration said they would not cooperate with the program’s restart, writing in an open letter to Biden and several other federal officials that “there is no way to make this program safe, humane, or lawful.” Washington will have to look elsewhere, apparently, to provide the migrants the legal aid it has promised.

Advocates for migrants’ rights have criticized what they call the Biden administration’s contradictory stance on the program. Upon its relaunch, the Department of Homeland Security said in a statement that Secretary Alejandro Mayorkas “has repeatedly stated that MPP has endemic flaws, imposed unjustifiable human costs, pulled resources and personnel away from other priority efforts, and failed to address the root causes of irregular migration.” The Biden administration also continues to challenge Remain in Mexico in U.S. courts.

But in the meantime, Biden’s relaunch of the program expands it beyond its former scope, including all of the Western Hemisphere among the nationalities of asylum-seekers who can be forced to wait out asylum proceedings in Mexico. This change is expected to affect Haitians in particular.

The Biden administration has not clarified exactly which nationalities of migrants will be enrolled in the new MPP program—thus receiving vaccination and improved legal representation—and which might be immediately expelled under a still-in-place pandemic health rule known as Title 42.

Unaccompanied minors of all nationalities, for their part, are expected to be able to seek asylum from inside the United States. When it comes to adults, immigration lawyer Taylor Levy tweeted last week that the decision whether turn a migrant away via Remain in Mexico or Title 42 could be based on their country of origin’s willingness to accept expulsion flights over the past year and a half. For example, Hondurans might be expelled to Mexico via Title 42, while Ecuadorians are placed in MPP.

“This is ridiculously confusing to understand & explain even for immigration attorneys,” she wrote. “Now imagine how hard this is to understand for asylum-seekers.”